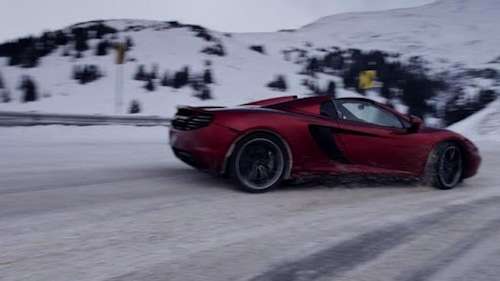 McLaren is about to launch the new 2013 McLaren 12C Spider in the U.S. and has just released a new video to promote its much anticipated arrival. They chose Loveland Pass in Colorado to film a “race” between Pikes Peak record holder Rhys Millen and Winter X-Games snowboarder Chanelle Sladics to promote the second high-performance sports car from McLaren. We first saw the 12C Spider when it made its global debut in North America during the Pebble Beach Concours d’Elegance last year.

The race through the Rocky Mountains takes place on Colorado’s Loveland Pass which is west of Denver heading up I-70. The short video below shows the new McLaren 12C Spider driving on Loveland Pass with Pikes Peak record holder Rhys Millen behind the wheel as he gives a ride up the pass to Winter X-Games snowboarder Chanelle Sladics. After reaching the top, Sladics gets out and challenges the McLaren 12C Spider to a race to see who gets to the bottom first. Who wins?

Loveland Pass can be treacherous in the winter

The short film was shot this winter on snow covered 11,990 feet (3,655 m) Loveland Pass which can be treacherous. Professional snowboarder Chanelle Sladics straps on her board and heads off the road and down the snowy cliff. Rhys Millen smiles as he powers the 616 horsepower 3.8-liter V8 and fishtails the 12C Spider as he begins the race down the snow-covered mountain pass.

Rhys is a native New Zealander is the current overall record holder for the Pikes Peak International Hill Climb, 2005 Formula Drift champion and 2008 Drifting World Champion. Sladics is an 8 time competitor at the winter X-Games and has hosted snowboarding competitions on ESPN. Rhys had fun driving the 12C Spyder and says, “With a familiar back ground in Hill Climb competitions and a native New Zealander myself, on the eve of this 50 year celebration for McLaren it was an honor to have driven the 12C Spider up the twisty snowy mountain roads.”

The Pikes Peak record holder uses the dedicated ‘Winter’ powertrain setting on the 12C Spider to keep the powerful sports car under control on the snowy road. The new system sets all electronic support systems to a maximum intervention level, with gearshift strategy and torque control optimized to limit any loss of traction. Rhys does well and keeps the 616 horsepower Spider on the road.

The McLaren 12C Spider will accelerate from 0-62 in just 3.1 seconds and has a top track speed of 204 mph. It was developed right alongside the 12C and gets the same McLaren driver-focused equipment. It comes fitted with Pirelli P Zero Corsa tires that helped keep the sports car on the snowy road. The powerful 3.8-liter V8 is mated to a seven-speed SSG dual-clutch transmission with shift paddles to send power to the rear wheels.

The new 12C Spider has a base MSRP of $265,750 in the U.S. (excluding titling, tags and taxes) and is now available to order from McLaren retailers across the globe. First deliveries to customers are planned for early next year.