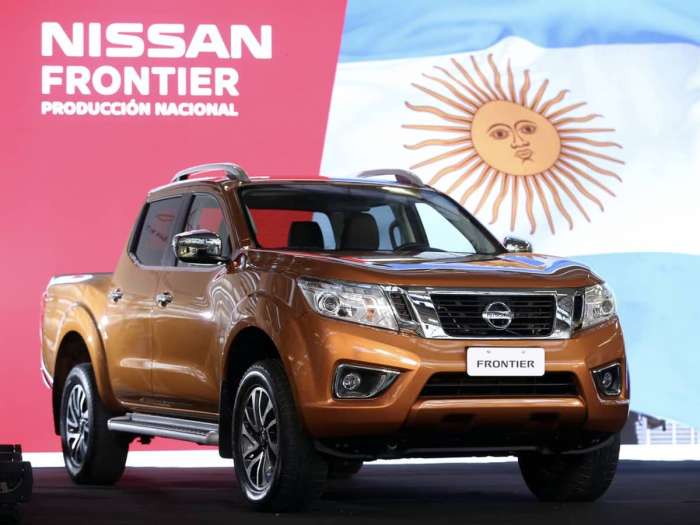 Nissan begins building the new-generation 2019 Frontier, but Argentina gets it done before US.
Advertisement

Nissan confirmed last year, the new-generation Frontier will be built in the U.S. at their plant in Canton, Mississippi, but it’s starting production in Argentina first. Nissan announcing the start of production of its new-generation 2019 Nissan Frontier pickup at their plant in Cordoba, Argentina. The new Frontier shares its platform with the Nissan Navara truck sold in Europe and South America.

This is the first Frontier assembled in the country and Brazil will be the first country to import the Argentina-made Nissan Frontier. “Three years ago, Nissan decided to bet strongly on Argentina,” said Valls. “We announced the arrival of Nissan to the country as a subsidiary and OEM, confirming a big investment that supports our plan to become one of the top automotive brands in the region. Today, we are honoring that commitment and celebrating the start of production of the Nissan Frontier. Today, we are delivering on our promise to Argentina.”

Truck buyers in the U.S., will get the next-generation Frontier sometime next year after it begins production in Canton, Mississippi. Steve Marsh, Vice President of Manufacturing at the Nissan Canton Vehicle Assembly Plant said, ”The dedicated employees here in Canton look forward to building the next generation of one of the best pickup trucks in America.”

The Frontier hasn’t had a structural remodel since 2005 and it’s well overdue, but big changes are coming. Nissan could launch the new 2019 Frontier in the U.S. with a Cummins turbo diesel. Nissan brought a prototype Frontier pickup with 2.8-liter Cummins Turbo Diesel engine to a press event last year. This was the same vehicle Nissan brought to the Chicago Auto Show in 2014. Reports say the new turbo diesel variant could be pumping out around 200hp and 350 lb. ft of torque.

Nissan is getting ready to build the next-generation 2019 Nissan Frontier at their Canton, Mississippi plant alongside the Murano, Titan, Titan XD, NV Cargo, and NV Passenger vehicles. Production starts in Argentina first.

Freeman wrote on November 6, 2018 - 12:38pm Permalink
Thanks designed for sharing such a nice thinking, paragraph is nice, thats why i have read it completely
Mike Gilmore wrote on November 22, 2018 - 9:35pm Permalink
I have been waiting for two years for the new Frontier diesel. I have a Pro-4X, and I love most things about it, but it is not a good vehicle for towing. The transmission is short on gears, and poorly programmed. When will I see the diesel?