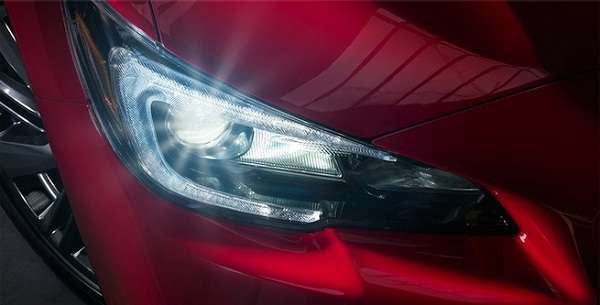 Subaru has confirmed its all-new 2015 WRX will make its world debut at the Los Angeles Auto Show next week on November 20. Car and Driver magazine gets a few details ahead of the debut.
Advertisement

The 2015 Subaru WRX is just about ready to make its world debut, but a few details have been released ahead of time to Car and Driver magazine. Car Scoops is reporting that Car and Driver was privy to some information on the new-generation WRX so they could have it in time for their next issue. Car Scoops was able to see a PDF file before it was quickly taken down by C&D.

If what Car Scoops saw was accurate, we can get an early idea of what the new 2015 WRX will feature. The next-gen WRX will get a new powerplant that will be getting more horsepower but in a smaller package. As with many automakers, they are producing highly efficient smaller engines while delivering substantial performance like the new Mercedes CLA45 AMG with a 2.0-liter engine.

It looks like Subaru has taken a page from the CLA playbook and will dump the outgoing model’s 2.5-liter turbocharged Boxer flat four. Subaru will use the Forester’s new 2.0-liter flat-four but it will be tuned to produce 268 hp and 258 lb-ft of peak torque. The outgoing 2.5-liter engine produced 265 hp and 244 lb-ft of torque. Subaru is wanting to attract new buyers to the brand with the WRX and the new more efficient engine will help with that task.

The new 2.0-liter engine will likely be more efficient and produce better fuel-economy. Many automakers are now using this latest direct-injection technology to achieve higher horsepower output while increasing fuel economy. Like the new 2014 Forester, the finely-tuned 2.0-liter Boxer engine for the WRX will also feature direct-injection and a new intercooler for increased performance.

The report also states that Subaru will do away with the five-speed manual gearbox and replace it with a new six-speed manual tranny. Sprint times for the new WRX are said to be from 0-60 mph in 5.4 seconds. With the available Continuously Variable Transmission (CVT) automatic, the WRX will increase that time to 5.9 seconds.

Other details that were seen in the C&D PDF file were that manual gearbox models will feature a new center differential with a fixed 50:50 (rear:front) torque split, while the CVT model comes with Subaru's All-Wheel Drive system featuring Variable Torque Distribution with a 45:55 (front:rear) torque split.

As we reported here back in August, Subaru is dropping the five-door hatch body style and the 2015 WRX will only be available only as a four-door sedan. Car Scoops also reports the new WRX will come with a new electrically assisted power steering, bigger brakes, 235/45 R17 tires, a stiffer suspension setup, and a 9 percent increase in torsional rigidity over the regular Impreza and 41 percent over the 2014 WRX.

Look for the new 2015 Subaru WRX to be unveiled in Los Angeles on November 20. The 2015 WRX STI will make its global debut in Detriot in January. Read about newly leaked WRX STI details here.