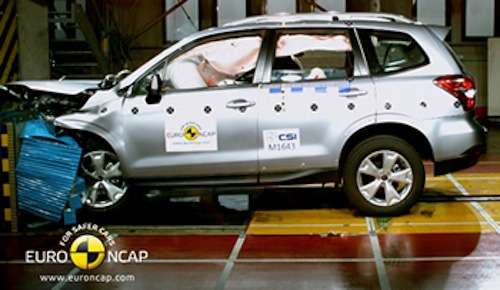 Barely a month old, the all-new 2014 Subaru Forester has already received the highest safety award in the world.
Advertisement

Subaru announced that its all-new 2014 Forester has been awarded the Top Five-Star Rating in the Euro NCAP Safety Test. This is the highest possible rating a car can get in the 2012 European New Car Assessment Program (Euro NCAP) safety performance test. This is just the third time in Subaru’s history that the Japanese automaker has been honored with the prestigious five star rating from Euro NCAP. It follows the 2009 rating for the Subaru Legacy and the 2011 rating for the Subaru XV Crosstrek. Now the barely month old 2014 Forester get accolades for achieving the top rating.

Safety is in Subaru’s entire lineup

When you think of safe automobiles, the Volvo brand is the one that is often mentioned, but Subaru is becoming known for having some of the safest vehicles on the planet. In the U.S., the top safety rating is administered by the Insurance Institute for Highway Safety (IIHS), and Subaru with the recent top safety award for the all-new SV Crosstrek, is the only manufacturer with 2012 IIHS Top Safety Picks for its entire lineup. And this is the third year running that Subaru has the distinction of earning the top safety pick from IIHS for every model it builds.

This latest announcement from Subaru marks the first top rating recognition that the all-new fourth generation 2014 Forester has received from Euro NCAP which is the world's leading automobile safety evaluation program. The new Forester scored well in the comprehensive and rigorous assessment system. A more rigorous system has been implemented since 2009 by Euro NCAP which evaluates "Adult Occupant Protection", "Child Occupant Protection", "Pedestrian Protection" and "Safety Assist".

The 2012 rating reflects the performance of the new Forester against Euro NCAP's latest requirements. The all-new crossover was awarded the maximum score for the protection of all the body regions in the side barrier test, and its front bumper scored the highest mark for the protection of pedestrian legs.

It’s no “accident” that Subaru gets the highest safety ratings across their entire lineup. The Japanese automaker uses a unique "ring-shaped reinforcement frame body" by optimizing the impact energy relay structure. They use high tensile steel that allows reduction in weight for fuel-efficiency, but it provides higher collision safety performance to impacts from all directions and enhanced passenger safety.

Subaru is committed to building vehicles that are not only enjoyable to drive, but the safest vehicles on the road. Under their "All-Around Safety" principle, they continue to prove that their active, passive and pre-crash safety technologies are more than just a nice-sounding slogan. Through its brand statement "Confidence in Motion", Subaru is committed to offering its customers their distinctive "Enjoyment and Peace of Mind" driving experience.

With the recently announced Top Five-Star Rating in the Euro NCAP Safety Test, the all-new 2014 Subaru Forester is the latest Subaru to continue in a lineup that proves the brand has some of the safest vehicles on the planet. Families that are looking for a safe vehicle, will find it in Subaru's new Forester. Look for the crossover to be in U.S. showrooms in the spring.

LG's New EV Battery Plant Is a Welcome News for Tesla
Tesla Giga Berlin's New Hurdle: It's Not Only the Gov't, but Now Tesla Itself
END_OF_DOCUMENT_TOKEN_TO_BE_REPLACED