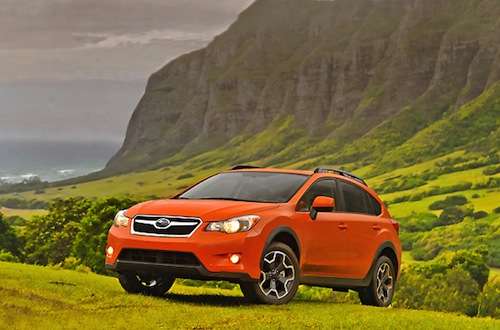 All-new 2013 Subaru XV Crosstrek has won another award and this accolade keeps Subaru the only manufacturer to have them across its entire lineup.
Advertisement

With the all-new Subaru Crosstrek awarded the IIHS 2012 Top Safety Pick, Subaru is the only manufacturer with 2012 IIHS Top Safety Picks for its entire lineup. That is a significant accomplishment for the Japanese automaker as they remain the only one to do it. When you think of safety, Volvo is the first automaker that comes to mind, but all Subaru’s including the new 2013 SV Crosstrek have received the highest-possible rating in IIHS evaluations. All Subaru cars need to be recognized as some of the safest cars on the planet.

This is the third year running that Subaru has the distinction of earning the top safety pick from IIHS for every model it builds. The 2013 Subaru BRZ received the award last month, and now the all-new 2013 XV Crosstrek earned a “good” rating which is the the top rank a vehicle can receive. Cars must pass the test in the moderate overlap frontal, side, rollover and rear impact evaluations from IIHS.

IIHS president Adrian Lund said, “For three years running, Subaru is the only automotive manufacturer with the distinction of earning IIHS Top Safety Pick awards for every model it builds. It’s tough to win, and we commend Subaru for making safety a top priority.”

In IIHS testing of vehicles, the Top Safety Pick recognizes vehicles that do the best job of protecting people in front, side, rear, and now rollover crashes based on 'good' ratings in each category. IIHS notes, they rank automobiles in terms of Good, Acceptable, Marginal and Poor, with 'good' as the top rank possible in Institute tests. All winners are required to be equipped with electronic stability control.

This isn’t the only award the new XV Crosstrek has received recently. Subaru announced earlier this week that the all-new 2013 Subaru XV Crosstrek and Subaru Impreza 4-door Sedan and Sport 5-door series have each won the "Good Design Award 2012" from the Japan Industrial Design Promotion (JDP).

Subaru built the 2013 XV Crosstrek to appeal to a young active lifestyle and the new crossover clearly gives buyers a car that not only has an attractive design, but is also fun to drive. It showcases the Subaru brands characteristics in its exterior styling and gets unique features like larger, unique tires and wheels, expanded ground clearance, larger front brakes, a bigger fuel tank and special black wheel arch and rocker panel cladding.

Subaru engineers continue to churn out safe vehicles and the new 2013 XV Crosstrek is the latest example of the automakers dedication to building the safest cars on the planet.