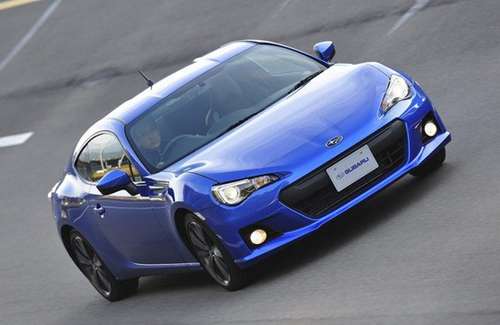 The all-new 2013 Subaru BRZ is fun-to-drive and is also one of the safest sports cars to drive and has earned the highest possible rating in IIHS evaluations.
Advertisement

Subaru has just announced that the Insurance Institute for Highway Safety (IIHS) has recognized the all-new 2013 Subaru BRZ as a 2012 Top Safety Pick. The 2013 BRZ rear-drive sports car earned a "good" rating, which is the highest rank a vehicle can score. The BRZ scored highest in the moderate overlap frontal, side, rollover and rear impact evaluations. The structurally identical 2013 Scion FR-S has also scored a “good” rating in the IIHS testing.

Because the 2013 Subaru BRZ and the Scion FR-S are lightweight, compact sports cars, it could come as a surprise that these cars scored so well. But it wasn’t a surprise for Subaru of America. Subaru remains the only manufacturer with 2012 IIHS Top Safety Picks for all models. All Subaru vehicles have earned the top safety award across their whole lineup.

"For three years running, Subaru is the only automotive manufacturer with the distinction of earning IIHS TOP SAFETY PICK awards for every model it builds," said Institute president Adrian Lund. "It's tough to win, and we commend Subaru for making safety a top priority."

In IIHS testing, the Top Safety Pick recognizes vehicles that do the best job of protecting people in front, side, rear, and now rollover crashes based on 'good' ratings in each category. The IIHS ranks in terms of Good, Acceptable, Marginal and Poor. The IIHS requires that all winners must come equipped with electronic stability control.

"With BRZ, Subaru has brought back the affordable sports car; and FHI engineering in the product has led not only to great driving fun but also top safety marks," said Thomas J. Doll, executive vice president and COO, Subaru of America, Inc. "We are passionate and uncompromising in our commitment to safety. Subaru is thrilled to continue as an industry leader in this area."

THe 2013 Subaru BRZ is a rear-drive sports car that was jointly developed along with the 2013 Scion FR-S. Both cars offer similar drivetrains and affordable fun for driving enthusiasts. The 2.0-liter Subaru boxer engine develops 200 horsepower and has a low center of gravity which gives both cars a true sports car feel.

Because the Subaru boxer engine sits low and farther back in the chassis, that keeps the center of gravity as low as possible which is ideal for a sports car. The design gives the car a dynamically favorable front-to-rear weight ratio of 53:47 and a low center of gravity comparable to some exotic supercars. The car weighs just 2,800 pounds and utilizes an aluminum hood to save weight.

The joint venture between the two Japanese automakers has produced the 2013 Subaru BRZ and Scion FR-S sports cars that are not only fun to drive, but are also the safest cars on the road or track.

The 2013 Subaru BRZ is hotter than a firecracker