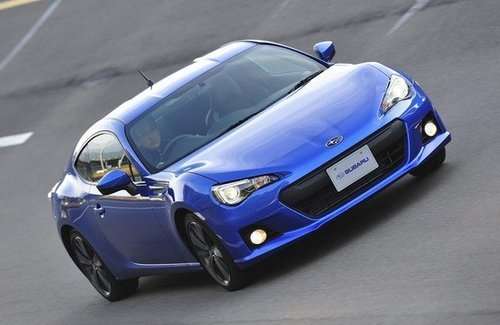 With the launch of the 2013 Scion FR-S, prices on the Subaru BRZ continue to drop and is being outsold by a huge margin.
Advertisement

Yesterday we reported that USA Today was saying that a $400 discount was being given on the BRZ, because Subaru dealers were selling so many fewer of the sports cars than the Scion FR-S. But Subaru representative Michael McHale has said there is a misunderstanding. McHale says the discount that was reported by USA Today, came from analyst’s calculation of the value of the current Subaru 2.9-percent APR program. It was all based on the financing of the car, not the actual sticker price.

Back in April, we reported that due to overwhelming demand, 2013 Subaru BRZ demand had pushed deliveries on the rear-wheel-drive sports car into January. And dealers were getting up to $5000 more than the suggested MSRP on the new sports car. We also reported last month that when the 2013 Scion FR-S was launched, we speculated that now that they had a choice, BRZ buyers might just drive down the street to their Scion dealer and get the Toyota version of the popular two-door coupe.

USA Today is reporting that Scion’s recent launch has forced Subaru dealers to cut prices on the BRZ because of the new competition from the FR-S. The online magazine says that even though the Scion FR-S is providing competition, Subaru dealers are getting an average transaction price of $29,085 for the BRZ, vs. Scion stores' average $25,653 for a similarly equipped FR-S. TrueCar.com who provided the data for the report, says there was a $400 sales incentive on the BRZ given by dealers in June. And no incentives have been offered on the FR-S.

The two cars are similar but different

Even though the two cars are very similar and were jointly produced by Subaru and Toyota, that’s where the similarities end. The two Japanese companies market their sports cars very differently here in North America. The 2013 Scion FR-S is offered in a single model and there are two choices: with an automatic transmission ($26,030), or a manual gearbox ($24,930). Just a few options are offered like Sirius XM satellite radio service, exterior trim, and wheel locks.

But the base BRZ comes with standard high-intensity discharge (HID) headlights and a standard navigation system. FR-S doesn't offer either of these even as options. Even though the BRZ offers more goodies on the inside, buyers are not seeing the value.

Even though the BRZ offers more, buyers are going down the street to the Scion dealer. Last month, Scion sold 2,684 FR-S models compared to 818 Subaru BRZs. Even though Subaru never intended the BRZ to be a large volume seller, that’s a large difference. Maybe the slick new ad campaign for the 2013 Subaru BRZ in Canada will make its way to the U.S. to help sales here.

John Goreham wrote on July 11, 2012 - 12:30pm Permalink
This surprised me. Maybe it is simply that Toyota gets more feet in the door due to its many more dealerships and more loyal customers (more as in total number). I moved away from Subys to Toyotas due to the dealership experience. maybe that is a factor too. After all other than the Suby having a standard Nav system, the cars are pretty much identical.
Nicolas Zart wrote on July 11, 2012 - 3:03pm Permalink
I agree with the Subaru dealership experience which has been applying in Long Beach, California and ever so better elsewhere. What this shows is also how narrow minded businesses are by over-charging for a car, knowing slightly the same with a different badge is around the corner. What do you think would happen? People will go to the cheaper. Subaru needs to get a better handle on its marketing and dealership system if it wants to sell more cars. The cars are not the problem, as usual, management needs to re-calibrate.
MiniGuy wrote on July 11, 2012 - 1:06pm Permalink
This article is misleading. Toyota / Scion is just getting a larger allocation of the manufacturing. I have a Subaru BRZ on order and my estimated delivery in spring 2013. If I wanted the lower spec Scion I would only be waiting about 3 months. I suspect a lot of people are just unwilling to wait for the Subaru. If they were the same number of subaru's and scions at the dealers I think you would see similar sales numbers. I hope Toyota see's the market for a higher level spec model for those of us who are willing to pay a little more to get a little more. TRD options catalog anyone?
john wrote on July 11, 2012 - 10:43pm Permalink
Canada add,shown in dark blue.Not avalible in canada.Subaru are killing sales ,on colours for one reason,only four in canada ,,black, white, silver,and world raley blue,,
john wrote on July 16, 2012 - 9:17pm Permalink
it is always the same story in canada,we pay more and get less,looks like they want scion to sell more on colour choice alone,this can be a sale braker for subaru
WD27 wrote on May 28, 2014 - 10:38pm Permalink
Just bought the 2014 FRS. I researched this car upside down and sideways. Even with the research, I didn't care much about the difference between the companies, I just wanted the car. Well, the experience over at Subaru was HORRIBLE! It's no surprise at all that these people are being outsold all the over the place. They are NOT nice. First things first. I called ahead and spoke with the Sales guy I was going to meet. He was super nice! I was genuinely looking forward to getting there and meeting him. When I arrived, he was busy with clients so I was passed off to the guy who would take me on my test drive (FYI, the cars drive the same unless you're on a racetrack). So I watch how the other employees treat the young guy who took me on the test drive. <---- Not nice! Later when I finally sit with sales guy, he immediately rips into all Japanese manufacturers but sets Subaru apart. Some letter dated April 2013 about how the others contract out their airbags and they're all being recalled now but of course, Subaru does everything themselves and they are the cat's meow! YAWN!!! I couldn't take the we are the best thing since sliced bread shpiel and well, here I am now an FRS owner. I'm sad that I couldn't get the Monogram Series. I am sad that the SatNav sucks large (yes I'm a sucker) however, it's a cute car. It's a cheap car. It's a well-made car that will serve me well for the few years that I'll keep it. What more can anyone ask for as a stop-gap measure?
Armen Hareyan wrote on May 29, 2014 - 8:11am Permalink
WD27 congrats on your new 2014 FRS.