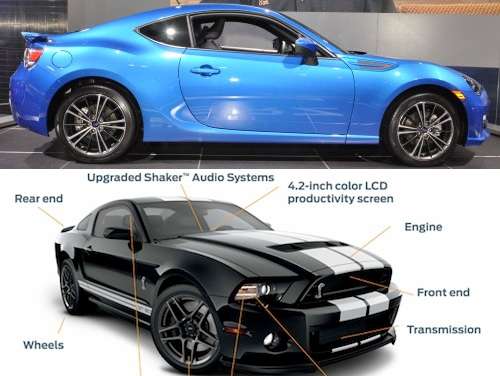 On Motor Trends Head 2 Head, pro race driver Randy Pobst takes the 2013 Ford Mustang V-6 and the 2013 Subaru BRZ Limited out on Willow race track to see which car comes out on top with interesting results. Angus MacKenzie who hosts the program, first took both cars out on winding canyon roads to see how they perform. After carving up the corners, Angus hands the keys over to Pobst for some hot laps around the track.

Both the 2013 Subaru BRZ and the 2013 Ford Mustang are front engine rear-wheel-drive coupes, but that is where the similarities end. The first thing you notice is the large difference in horsepower and engine displacement. The Subaru BRZ has a 2.0-liter flat four engine that produces 200 horsepower. The Ford Mustang has a 3.7-liter V-6 engine with 305 horsepower under the hood. On paper it looks like it’s a no brainer which is the faster car. But that doesn’t always mean it’s the more entertaining car to drive. Let’s look at the rest of the differences before seeing what Angus MacKenzie and Randy Pobst think.

In independent testing, the 2013 Ford Mustang V-6 with the perfromance package went from 0- 60 mph in just 5.3 seconds and passed through the 1/4 mile in 13.9 seconds at 100 mph. The Ford Mustang has a solid rear axle and many driving enthusiasts would like to see the Mustang get an independent rear setup.

The 2013 Subaru BRZ is an all-new front engine rear-wheel-drive car developed in partnership with Toyota. Both companies wanted to brighten up their dim sports car portfolios and Toyota took the lead in the planning and designing phase, while Subaru offered its proven high-performance boxer engine and production capabilities. While Subaru is known for their all-wheel-drive vehicles, the BRZ isn’t the first rear-drive vehicle for the Japanese automaker. That title belongs to the 1953-'54 Fuji Heavy Industries Prototype 1 sedan, later known as the Subaru 1500. P-1 employed the first Japanese-made monocoque body and paved the way for brand icons such as the Subaru 360 and 1000.

The 2013 Subaru BRZ Limited tester came with a 2.0-liter four-cylinder boxer direct and port-injected engine that produces 200 horsepower and mated with a six-speed manual fully synchronized close-ratio transmission. The engine is naturally aspirated and not turbocharged. Because of the engines low center of gravity, the BRZ offers a unique driving experience. The 2013 Subaru BRZ Limited had a sticker price of $28,245.

Check out the video and find out which front engine, rear-wheel drive coupe comes out on top.

Anonymous wrote on May 20, 2012 - 8:32pm Permalink
so nothing in its own class can compete with the mustang so we put it up against little sub compacts tuners, well i heard somebody say the mustang has a solid rear axle so why dont we put it up against a chevy silverado 6.2L and see which one can haul and tow the most. i read somwhere that chevy is whining and lobbying the ama to change the rules on musclecars saying the new rules should say that a musclecar has to weigh no less than 4K lbs and that any car with a 103'' or more wheelbase under 4Klbs should be considered a supercar that way they can say their slomaro is the fastest musclecar and the mustang is the slowest supercar or tuner depending on which engine it has. so would that put the 662HP gt500 in a exotic supercar class or just a super supercar class??????.