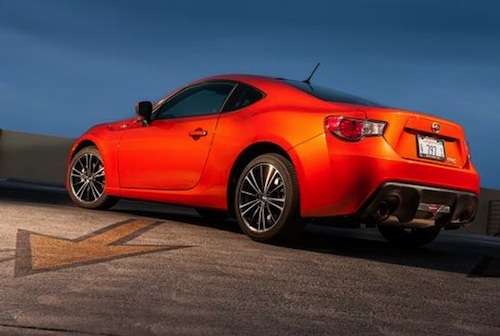 When Toyota introduced the Scion brand in 2002, their goal was to develop a brand that would attract young buyers into the Toyota family. They definitely achieved that goal but the tC was the sportiest model and a true performance model was the missing element. When Akio Toyoda Toyota’s CEO took over three years ago, he infused his car company with a new spirit, and as a certified test driver for Germany's famed Nurburgring, Toyoda brought a racing passion to the company.

Before the creation of the FR-S, Toyoda asked himself, “where is the passion in our lineup?, I want to build a sports car.” Toyoda’s vision resulted in Toyota’s partnership with Subaru in developing the 2013 Scion FR-S compact rear-wheel-drive sports car. Akio Toyoda wanted an authentic sports car that would have an affordable price, and he delivered in a big way.

The 2013 FR-S will start at $24,200 with a six-speed manual transmission, and $25,300 when mated to a six-speed automatic transmission that features paddle shifters and Dynamic Rev Management technology. The engine was developed in a partnership with Subaru and comes with a 2.0-liter naturally aspirated four-cylinder engine producing 200 horsepower and 151 lb. ft. of torque. The Subaru boxer engine incorporates Toyota’s cutting-edge D-4S direct and port injection that comes from the Lexus IS F.

The FR-S has EPA-estimated ratings of 34 mpg/highway with the automatic, and 30 mpg with the manual transmission. Because of the engine’s unique design, the boxer sits low and farther back in the chassis which keeps the center of gravity as low as possible which is ideal for a sports car. The design gives the car a dynamically favorable front-to-rear weight ratio of 53:47 and a low center of gravity comparable to some exotic supercars. The car weighs just 2,800 pounds and utilizes an aluminum hood to save weight.

Underneath, the FR-S gets a sport tuned suspension which utilizes MacPherson struts up front and a double wishbone system in the rear for spirited driving through the corners. Lightweight 17x7-inch alloy wheels and ventilated disc brakes are standard on all four corners.

Inside, the Scion FR-S sports 2+2 seating with fold down rear seats for maximum cargo carrying capability. A leather-trimmed steering wheel is standard and has both tilt and telescopic adjustment.

The FR-S will come standard with features like an eight-speaker AM/FM/CD/USB 300-watt Pioneer audio system, HD Radio and Bluetooth connectivity.Toyota says the FR-S will be the first Scion to offer a connected multimedia audio system called BeSpoke, powered by Pioneer’s Zypr.  When connected to an iPhone, BeSpoke will offer a higher level of connectivity features and personalized content like Facebook, Twitter, and Internet radio.

The Scion FR-S will be available in seven colors including Raven, Asphalt, Hot Lava, Argento, Ultramarine, Firestorm and Whiteout. It looks like Toyota is already developing a faster version of the FR-S with engine upgrades. For now, the Scion FR-S will be a fun rear-drive affordable sports car.