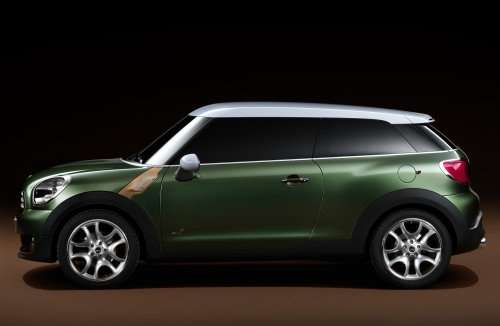 Mini to change the Paceman name to "Countryman Coupe"

The Mini Paceman Concept that made its debut at the North American International Auto Show will most likely be called Countryman Coupe when it arrives in 2013.
Advertisement

Mini first unveiled the Paceman concept at the 2011 Detroit Auto Show, and confirmed that they would bring the car to production in 2013. As reported by Car and Driver, the Paceman concept name was expected to change before it was officially introduced.

And now we have heard that the production version of last year’s Paceman concept will get a name change to Countryman Coupe. The little coupe is labeled as a crossover that will have two doors and a more masculine stance.

When Mini unveiled the Paceman in Detroit, the concept was powered by the automaker’s hottest engine. It’s the same 1.6-liter turbocharged four-cylinder from the John Cooper Works models that pumps out 211 horsepower and 207 pound-feet of torque. The Paceman will also likely get the Countryman's six-speed manual transmission. That should give it outstanding performance and make the coupe a fun little car to drive.

The chassis of the Paceman Concept was specifically designed to handle the extra potent engine and it will be interesting to see how it handles under spirited driving conditions. Customers have come to expect responsive handling and agility from a Mini, and the Countryman Coupe should deliver.

The front axle features MacPherson spring struts with lower track control arms which, combined with Electric Power Steering with speed-sensitive power assistance, should be ideal for this car. The multi-link rear axle was developed by the BMW Group chassis expertise and will perform equally well in both the front-wheel-drive and the all-wheel-drive versions of the Coupe.

Like the Mini Countryman, the Coupe will have the ideal platform for the permanent all-wheel-drive system. It features an electromagnetic centre differential which varies the distribution of power seamlessly between the front and rear axles. In normal driving conditions 50 percent of the drive can be sent to the rear wheels, but in extreme situations 100 percent will be directed to the rear.

Outside, the Countryman Coupe will get a unique rear-end styling complete with horizontal taillights (the Countryman has vertical ones), and a revised bumper.
If the inside is anything like the concept the front should get sport seats and the rear two comfortably-contoured individual seats with backrests. And we should see the same flow-through center rail that extends all the way to the backseat.

The Countryman Coupe will be the seventh model to join the Mini family, and we are expecting to see a close-to-production version displayed at the Paris Auto Show in September. Production is expected to begin in early 2013, with the Coupe hitting showrooms in mid 2013, possibly as a 2014 model.

If the few patent drawings that have already made their way to the web are any indication, the final version will be remarkably similar to the concept displayed in Detroit.
Stay tuned here at Torque News for the latest news on the Mini Countryman Coupe.

Tesla Giga Berlin's New Hurdle: It's Not Only the Gov't, but Now Tesla Itself
Teslas Are Sold Out Until 2023, But The Timing May Reverse
END_OF_DOCUMENT_TOKEN_TO_BE_REPLACED