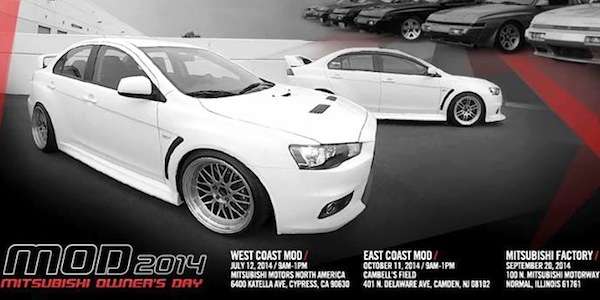 The last 2015 Mitsubishi Lancer Evolution to debut at MOD 2014

Mitsubishi will unveil the 2015 Lancer Evolution at the Mitsubishi Owners Day in Cypress California. Will this be the last EVO?
Advertisement

Mitsubishi says this will be the largest MOD event ever, and there should be thousands of loyal Mitsubishi brand enthusiasts on hand to see the 2015 Lancer Evolution. The event is held at the company's North American headquarters located in Cypress, California. The annual event will be host to thousands of diehard Mitsubishi fans and 1,200-plus Mitsubishi Motors vehicles.

Mitsubishi has said the 2015 Lancer Evolution will be the last of this generation before it makes its North American exit. Mitsubishi has been very secretive about the next-generation performance car, but its going to undergo some big changes. It will likely have a new name and a high-performance hybrid powertrain that MMC has been developing in its motorsports program.

The Mitsubishi Concept XR-PHEV compact SUV/crossover will be on hand and make its North American debut. It features a 1.1-liter direct-injected and turbocharged engine-based plug-in hybrid electric vehicle (PHEV) drivetrain. Mitsubishi will unveil the Mitsubishi Mirage G4, a sedan version of the hot-selling fuel-efficient Mitsubishi Mirage 5-door. The updated Mitsubishi Outlander Sport will also be there along with the entire 2015 Mitsubishi lineup.

Mitsubishi will host its biggest and best-ever MOD celebration for Mitsubishi Lancer Evolution enthusiasts, and attendees will be the first to see the last 2015 Lancer Evolution at the event. The festivities kick off at 9:00 am on Saturday July 12, with the event open to the public and admission completely free of charge. For more information go to https://www.mitsubishicars.com/owners/events

For Some Former Daimler Managers Daimler Is Authority, While Tesla Is Like a Startup
How Daimler Unintentionally Subsidizes Tesla Giga Berlin
END_OF_DOCUMENT_TOKEN_TO_BE_REPLACED