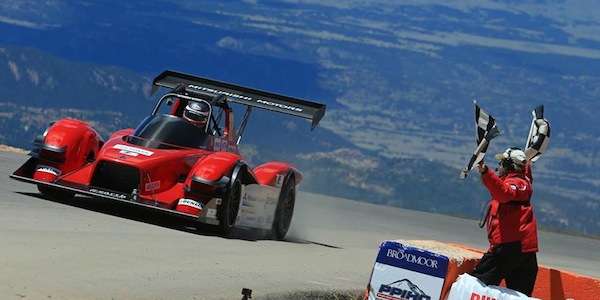 The all-electric Mitsubishi MiEV Evolution III dominates with a first and second place in the Electric Modified Division at Pikes Peak. Are we looking at 2015 Mitsubishi Lancer Evolution successor technology?
Advertisement

Mitsubishi Motors Corporation (MMC) entered two MiEV Evolution III all-electric racecars in the Electric Modified Division at the Pikes Peak International Hill Climb and achieves a one-two victory. MMC wants to show how an all-electric vehicle can perform under extreme conditions and they succeeded in a big way. Are we looking at 2015 Mitsubishi Lancer Evolution successor technology?

Win verifies the performance of their EV components

MMC can now boast they have made huge advances in all-electric and all-wheel drive technologies. The results and the performance of the cars during the grueling high-altitude event speak volumes about the advanced level of MMC's EV and four-wheel drive control technologies. Mitsubishi Motors entered the Pikes Peak Hill Climb three years in a row now, viewing it as an opportunity to verify the performance of their EV components.

MMC will use the valuable information from the weekend to build their next-generation EV and PHEV models. General Corporate Manager, EV Business Office, Kanenori Okamoto's said, “In the 2014 Pikes Peak, we have verified these components' durability performance and will reflect them in our next-generation EV and PHEV models. In addition, we will use data from the race to not only to improve four-wheel control technologies, one of MMC's specialties, to allow future cars to drive faster and with greater stability, but also use Pikes Peak experience to further educate our control system engineers.”

Look for a new performance car

Performance fans can be assured that Mitsubishi is developing a new performance car to follow the 2015 Mitsubishi Lancer Evolution which is the last generation. MMC plans to continue development of their four-wheel control technologies at the heart of the control systems in their e-EVOLUTION (integration of electric-motor drive and S-AWC) announced in the New Stage 2016 mid-term business plan. The future performance car technology is here.

The Mitsubishi MiEV Evolution III was just 2.5 seconds off from the overall winner who had an internal combustion engine, and this shows the vast possibilities of electric vehicles in the future moving forward. Mitsubishi will likely announce the new-generation 2015 Mitsubishi Lancer Evolution successor with their latest hybrid-electric powertrain. The Pikes Peak results give us a good idea of what its capabilities will be.