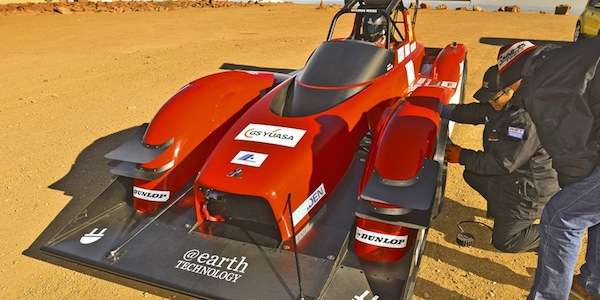 The Mitsubishi MiEV Evolution III is set to take on the Pikes Peak Hill Climb today. Why does Mitsubishi do it?
Advertisement

Mitsubishi will enter their MiEV Evolution III all-electric race car in The Pikes Peak International Hill Climb that is the second oldest motorsports event in the United States following the famed Indianapolis 500. The very first event was held in 1916, and Mitsubishi aims to win in 2014. It’s the ideal testing ground for automakers and its a tough challenge because of the altitude.

The course imposes extraordinarily challenging driving conditions upon the driver and cars with its 12.42 miles consisting of 156 corners. The great elevation change of 4,720 feet is challenging on the cars that have to deal with temperature, air pressure, weather and other atmospheric conditions. Why does Mitsubishi do it?

Why does MMC race the MiEV Evolution III?

Mitsubishi Motors has believed for decades that motorsports is the ultimate proving ground for vehicles as demonstrated by its successful history with multiple championships in the extremely difficult World Rally Championship (WRC) and Dakar Rally. Mitsubishi is at the Pikes Peak International Hill Climb to prove that they are the leader in electric-powered vehicles.

They already produce the Mitsubishi i-MiEV, and its derivatives combined with the Mitsubishi Outlander PHEV, have already sold about 50,000 units throughout Japan, Europe and Asia. Mitsubishi Motor Corporation (MMC) would like to continue developing and advancing EV technology so that it remains the leader in this new form of high-tech, eco-friendly transportation.

They aim to set a record time

Their goal is to gain valuable knowledge

MMC’s main goal is not only to win, but they will use the data obtained through the participation in this grueling hill climb to “enhance the durability and reliability of its advanced 100 percent electric vehicles (EV), plug-in hybrid electric vehicles (PHEV) and conventional gas- or diesel-powered hybrid vehicles in the company's future vehicle development.”

Knowledge gained from last years race enabled MMC to further develop their all-wheel drive system that is being used to develop the unique twin electric motor-based Super All-Wheel Control (S-AWC) system found on the Outlander PHEV. This is the first of its kind on a production crossover vehicle. This new vehicle arrives in the U.S. next year.

Mitsubishi Motors Corporation will utilize the data and technical know-how they learn through its participation in the Pikes Peak International Hill Climb in its next-generation advanced technology R&D program for eventual use in future production vehicles. Look for Mitsubishi to be the leader in global EV technology in the future.