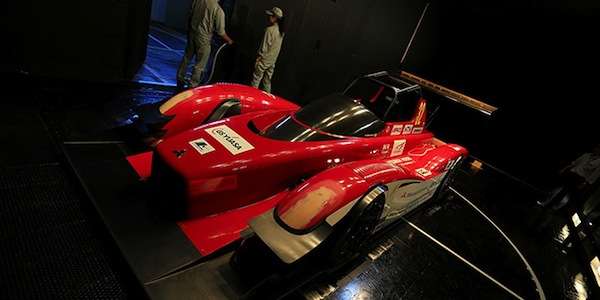 We can say goodbye to the 2015 Mitsubishi Lancer Evolution, but say hello to the new-generation successor’s technology that will be at Pikes Peak.
Advertisement

The 2015 Mitsubishi Lancer Evolution is going away after this generation model finishes production next year in August. How will Pikes Peak influence its successor? We will get a good look at the new-generation Mitsubishi Lancer Evolution successor when the Japanese automaker brings a pair of MiEV Evolution III all-electric race cars to the 92nd running of the “Race to the Clouds” at Pikes Peak on June 29.

These two race cars will show us the technology that will go into the new-generation Lancer EVO production performance car. Mitsubishi is being very secretive about what they are doing with the Lancer Evolution, and the next-gen performance car will probably have a new name to go along with its new advanced technology. We know that Mitsubishi is not abandoning the Lancer Evolution altogether, but it will be much different than it looks now with its gasoline powertrain.

Will Mitsubishi abandon the sedan performance market after 2015?

The technology exists in the MiEV Evolution III

Like Subaru, Mitsubishi has used rally racing to develop their all-wheel-drive technology that goes into their production performance cars. The Japanese automaker has been using the Pikes Peak Hill Climb as a “laboratory” for testing their advanced MiEV (Mitsubishi innovative Electric Vehicle) technology.” Don Swearingen, executive vice president Mitsubishi Motors North America, Inc. (MMNA), says, "it not only features high elevations but also a range of weather conditions to challenge the performance and reliability of our technology."

This is the third year Mitsubishi has brought the MiEV Evolution technology to Pikes Peak. The i-MiEV Evolution they entered in 2012 used the motors, battery and many other components from the production i-MiEV model. They finished second in the Electric Division and it proved that MMC's electric vehicle technologies were more than capable of withstanding the rigors of the tough world of motor racing.

MMC uses racing to gain knowledge for the production model

It was their first Pikes Peak, but the second place finish in the Electric Division proved that Mitsubishi Motor Corporation’s (MMC) electric vehicle technologies were more than capable of withstanding the rigors of the tough world of motor racing. Last year, driver Hiroshi Masuoka, says that MMC specifically ran the MiEV Evolution II to gain knowledge for a future performance production vehicle. He said, “Last year, our second Pikes Peak, we entered the MiEV Evolution II, fitted with many advance development parts, with the objective of feeding back the data and knowhow gained into future production models.”

Mitsubishi also is testing their new-generation S-AWC all-wheel-drive system to further increase performance. Just like the 2015 Mitsubishi Lancer Evolution, their next-generation performance production sports car will come with all-wheel-drive and will be a good performer in the corners on the track. And the new production performance model will have plenty of power from the all-electric technology. MMC bumped up the power from 536 bhp to 603 bhp in this years MiEV Evolution III race car.

Masuoka says he can feel the difference in the advancements in the new S-AWC system over last year. “I can feel confident about extracting every ounce of the increased performance, thanks to evolutionary development of the S-AWC system. This has resulted in a quantum leap in vehicle stability on winding roads, and I am confident that MiEV Evolution III will demonstrate the full extent of its potential over a course such as Pikes Peak with its 156 corners.”

Hiroshi Masuoka and Greg Tracy, his teammate from last year, we will be going flat out for victory in the Electric Modified Division this June at Pikes Peak. They are testing the technology that will go into the 2015 Mitsubishi Lancer Evolution successor. That’s good news for performance fans.