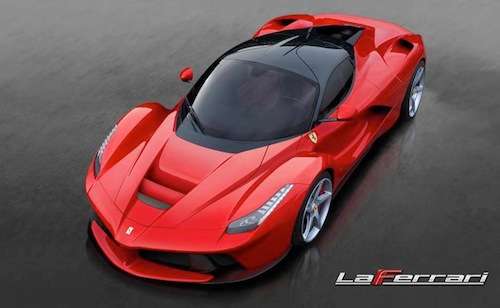 What makes LaFerrari the most attractive supercar on the planet [video]

Ferrari design professionals have given the new LaFerrari super sports car a design language that makes it the best design in the world. See what award the supercar received.
Advertisement

When the all-new Ferrari LaFerrari was unveiled in Geneva, it was an immediate hit with the press and public around the globe. It was the undisputed star of the show and drew the largest crowds to the Ferrari stand. A few weeks later when it was unveiled for the first time in China, the scene was repeated again as spectators at Auto Shanghai 2013 couldn’t wait to get a glimpse of the new hybrid supercar from Maranello. And the new LaFerrari keeps getting attention around the globe. Why is Ferrari’s latest supercar continuing to get all this recognition?

The new super sports car has just received a design award for being the best designed car in the world. Maranello’s special limited series model has received the award from AutoScout24, Europe’s biggest online car buying platform with 17.1 millions users annually. LaFerrari was presented with the special Design Award by the editors of AutoScout24 on-line magazine as part of the 11th Internet Auto Awards.

The design team at Ferrari worked long and hard to come up with the unique design. When the suprcar was unveiled in Geneva, Ferrari President Luca di Montezemolo Ferrari gave this statement, “LaFerrari is the finest expression of our company’s unique, unparalleled engineering and design know-how, including that acquired in Formula 1,” summarized Luca di Montezemolo.

Design language that is elegant and radical

“Design” and “Future” are two new special categories this year for the 11th Internet Auto Awards. Winner of the special Design award went to the new LaFerrari. The editor of AutoScout24 said, “Ferrari design professionals have implemented an extremely emotional design language of thought which is both elegant and radical in the LaFerrari.”

The editors at of AutoScout24 didn’t have a very hard choice for the new design award this year. LaFerrari’s fascination with the press and public is about styling, power, performance and new technology on the supercar. The styling is as much a draw as the performance and technological advancements of the new Italian sports car. Ferrari says the LaFerrari’s styling is the starting point for the new Ferrari generation of the next ten years.

An easy choice to make

La Ferrari that was first unveiled in Geneva, is a special limited-edition model of which only 499 examples will be produced for global distribution. The new super sports car is the first hybrid in the companies history and it features a 963 combined horsepower hybrid drivetrain. 800 horsepower comes from the V12 gasoline engine and 163 from the electric motor.

The AutoScout24 Internet Auto Award is Europe’s biggest public automotive on-line award with votes being cast between January and March by 223,000 on-line users from Austria, Belgium, France, Germany, Italy, the Netherlands, Spain and Switzerland. The new Ferrari LaFerrari was an easy choice for the very first “Design” award from the on-line magazine. We are sure there will many more awards to follow.

LG's New EV Battery Plant Is a Welcome News for Tesla
Tesla Giga Berlin's New Hurdle: It's Not Only the Gov't, but Now Tesla Itself
END_OF_DOCUMENT_TOKEN_TO_BE_REPLACED