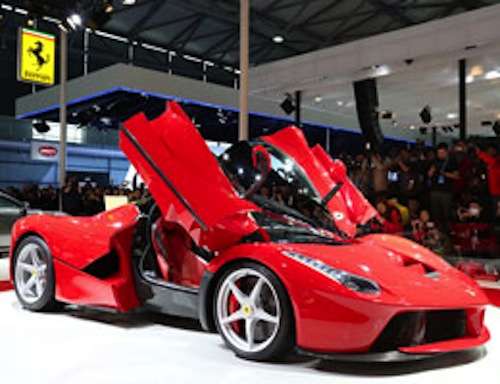 The new Ferrari LaFerrari hybrid supercar makes its China debut at Auto Shanghai 2013 and is the undisputed star of the show again.
Advertisement

When the all-new Ferrari LaFerrari broke cover at the Geneva Motor Show last month it was one of the most anticipated cars to ever be unveiled in Geneva. Fans around the globe anticipated the new hybrid sports car from Ferrari and couldn’t wait to get a glimpse of the new supercar from Maranello. Now the scene repeats itself in China at Auto Shanghai 2013 as the special limited edition car is the star again as it undoubtedly attracted the most attention from the press and public. Even after a month after its global debut in Geneva, what has fans in China so excited about the new LaFerrari?

Numerous Chinese performance car enthusiasts and auto journalists came to the Ferrari stand at Auto Shanghai 2013 to see the first hybrid from the Prancing Horse. LaFerrari’s fascination with the public is about styling, power, performance and new technology on the supercar. Fans lined up at the Ferrari stand to see the new limited edition supercar with 963 horsepower. The styling is as much a draw as the performance and technological advancements of the new Italian sports car. Ferrari says the LaFerrari’s styling is the starting point for the new Ferrari generation of the next ten years.

At Auto Shanghai 2013 there was a sea of fans with their cameras and press lined up in front of the Ferrari stand, right from the opening of the show, waiting for the moment when Amedeo Felisa, the Maranello company’s Managing Director, unveiled the new special limited edition car for the first time in Asia. It was the same scene that played out last month in Geneva at its very first unveiling. Why is the China show so important for the Italian sports car maker?

China is a strategic market for Ferrari

At the China unveiling, Amedeo Felisa said, “China is strategically very important for us and we will continue to invest in this market,” stated Felisa in his speech. “As of today, we already have 25 dealerships and we want to get up to 30 in 2013, before adding a further five the following year.”   Ferrari is counting on the largest auto market in the world to be a strategic place for the Italian automaker. China became the second market in the world for the Prancing Horse in 2012 when they sold close to 800 cars in People’s Chinese Republic, Hong Kong and Taiwan. And the first quarter of 2013 is starting strong for Ferrari. The Chinese are purchasing the Ferrari brand in record numbers. And the Asian market is a place the sports car maker from Maranello will continue to put an emphasis on.

The new Ferrari’s are powerful, fuel-efficient and clean

Its more than just performance as Ferrari research and development placed particular emphasis by reducing fuel consumption and emissions of its range of cars, which has been reduced by 40% in the past five years. Even with the greener and cleaner cars, Ferrari was able to increase power by 100 horsepower. This is important as Ferrari expands its influence around the globe. And the Italian automaker is going even farther with their commitment to the China environment.

Ferrari has paid much attention to environmental themes in China and is underlined by Ferrari’s involvement in the “One Million Trees” project. They have planted “no less than 67,000 trees” in a desert area of China to compensate for the emissions of its cars that drove on Chinese roads last year. The new LaFerrari is the first hybrid in the companie's history and it features a 963 combined horsepower hybrid drivetrain. 800 horsepower comes from the V12 gasoline engine and 163 from the electric motor. We are seeing the future of performance vehicles as more automakers seek to boost performance and at the same time meet new fuel mileage and emission requirements around the globe.

Chinese buyers of the new Ferrari LaFerrari will have to act quickly as only fifty of the hybrid supercars will find their way into Greater China. Ferrari will only have a limited production run of 499 worldwide which is more than twice the number of requests that have already been received by the Italian automaker. The new Ferrari LaFerrari hybrid sports car is a huge success around the globe and the Chinese are the latest to see the 963 horsepower supercar that is making history.