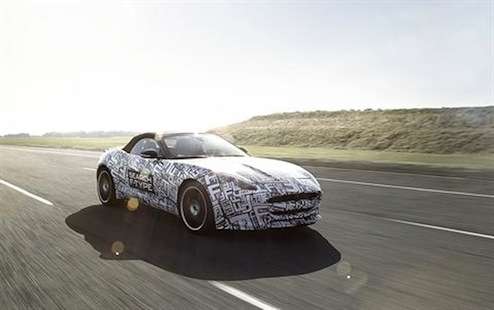 Jaguar F-Type: The most tested car in company history

The all-new Jaguar F-TYPE convertible will make its first global appearance in production form in Paris after some of the most grueling testing by any automaker.
Advertisement

The much anticipated Jaguar F-TYPE, will be officially unveiled on September 27th at the Paris Motor Show. The all-new aluminum two-seat convertible sports car was seen in June at the Goodwood Festival of Speed as it made a few laps to give the public its first taste. The new F-Type will be unveiled in Paris next month as it makes its global debut in final production form.

Jaguar has been testing prototypes of the new sports car and putting it through some rigorous paces. Jaguar is returning to the sports car market with the new F-Type and wants everything to be perfect on the new drop-top. Adrian Hallmark, Global Brand Director, Jaguar Cars, said: "The unveiling of the F-TYPE in Paris will be a truly significant day in Jaguar's history as it will mark the company's return to the sports car market, a market it originally helped to create.

The British luxury and sports car manufacturer has developed a Prototype test programme designed to “verify the staggering amount of design work that was carried out by Jaguar's engineers in the virtual world.” Jaguar which is now owned by the Indian company Tata Motors, has been expanding its lineup and the new F-Type is the return to the sports car era of performance and driving excellence. And Jaguar wants everything to be perfect when it's unveiled in Paris.

The grueling testing took place in some of the harshest environments in the world with more than half-a-million separate F-TYPE design analyses by Jaguar engineers. The goal of Jaguar's engineers, is to bring an F-Type to market that delivers the truest kind of sports car driving experience that the British automaker can offer.

Jaguar says that 10-million CPU hours of processing, creating more than 300TB of data went into developing the new F-Type. It would have taken thousands of physical F-Type prototypes to have the same amount of design analysis that it took to develop the new convertible sports car. Jaguar's Vehicle Line Director Ian Hoban said: "When you are working on a Jaguar sports car the expectations of the world are huge. We're really pleased how the attributes have translated from the virtual simulation work we've done into the physical world.

The convertible F-TYPE will be launched with a choice of three gasoline powered engines: 340PS and 380PS versions of Jaguar's all-new 3.0-liter supercharged V6, and a supercharged 5.0-liter V8. The new F-Type rag-top will be a true sports car with rear-wheel-drive configuration and all three engines will be mated to an eight-speed transmission and will be equipped with Stop/Start technology.

Now that Jaguar has done all the extensive testing, the all-new aluminum two-seat convertible sports car is almost ready to show the world what Jaguar can do in the sports car segment. The all-new F-Type is the next step in the Jaguar’s “sporting bloodline” and is about to become reality.

Phone Counseling wrote on September 21, 2012 - 1:38am Permalink
Hey there, You have done an excellent job. I'll certainly digg it and personally recommend to my friends. I'm sure they'll be benefited from this web site.