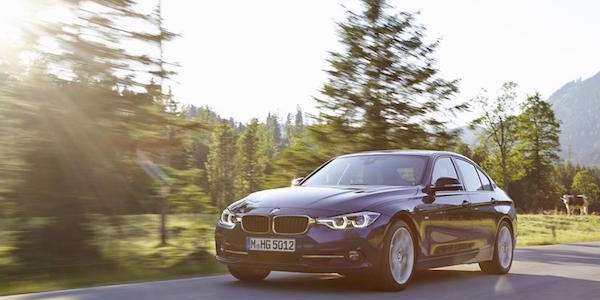 BMW 3 Series is the most researched car for 2015. If you want to stand out it’s not the car for you.
Advertisement

The new 2016 BMW 340i has been redesigned and is getting more attention from luxury car buyers than any other car on the planet. The BMW 3 Series is the Bavarian automaker’s best selling car in the lineup and it’s the most popular with car shoppers too. The BMW 3 Series is the most researched car according to Auto Trader UK. If you like to stand out from the crowd, you may wish to look elsewhere. There’s going to be more of BMW’s 3 Series on the road.

The BMW 3 Series is not only popular in the UK, it’s the world’s most successful premium car. Auto Trader UK found this out from analysis of around 43 million visits by people searching for a vehicle. BMW has three models that appeared in their top 10 search. In addition to the number one 3 Series, the 5 Series made number four on the list and the 1 Series was the ninth most-searched for vehicle.

According to other analysis by Auto Trader, car shoppers are increasingly looking for and purchasing premium models like the BMW 3 Series. The German automaker's best selling car came out as the most-searched car on the group’s website during the last 12 months. Auto Trader said it was also at the top of regional tables drawn up to see whether people’s car buying practices differed depending on their location.

The 3 Series is the undisputed king

Auto Trader’s editor in chief, Jon Quirk, said: “As we’ve seen previous years, the BMW 3 series has proven it is the undisputed king of the compact executive class, but it’s also interesting to see how dominant the premium car brands have been in both our national and regional searches.”

Car shoppers are turning to premium brands like BMW and their 3 Series because financing is cheap allowing more consumers to research and subsequently buy more expensive, upmarket cars. The 2016 BMW 340i gets a new engine and new suspension upgrades which improves its driving dynamics. If car buyers can afford the payments, why wouldn’t they choose a more comfortable, better performing car like the 3 Series? Yet if you want to be different and stand out, it’s not the car for you.