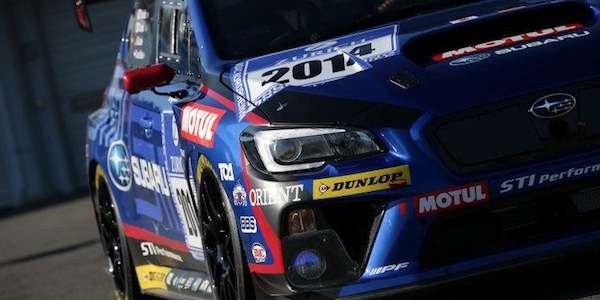 Would you like to go see the 2015 Subaru WRX STI NBR race car at the Nurburgring 24-hour race? Here’s how.
Advertisement

Participants will receive STI goodies and a commemorative photo taken with the WRX STI NBR race team. You will be able to attend the race and be greeted by the STI team manager and meet the team and see the WRX STI NBR race car before the race. Participants will be there to watch the entire race for the two days. Subaru and STI will arrange the airline travel and motel accommodations for the trip.

STI will participate for the 7th time in a row with the WRX STI at the Nurburgring 24-hour race and Subaru will bring a new car this year. All stages of work on the 2015 WRX STI from the design were carried out in close cooperation with the parent company Fuji Heavy Industries (FHI). Last year the 2014 WRX STI NBR car finished second in its class, and STI is looking for a third consecutive victory in its class since 2012.

Subaru will be in the SP3T class, for turbocharged engines displacing 1.75 to 2.0 liters, and will run in a competitive class with racing versions of cars from Audi, Volkswagen and Seat. The new 2015 STI NBR should be a good performer and will be powered by the 2.0-liter F4 engine. Many believe its a better engine than the production 2.5-liter the new STI comes with.

The new 2015 WRX 2.0-liter engine uses a combination of direct injection, high compression (10.6:1), Subaru Dual Active Valve Control System (D-AVCS), a twin-scroll turbocharger and an intercooler to get improved performance over the similar Forester XT version. The WRX STI NBR version will use different cams and higher-rate valve springs and other enhancements to enhance the performance envelope. The production WRX 2.0-liter gets a broader torque curve and peaks at 258 lb.-ft. over a 2,000-5,200 rpm engine speed range.

The Nurburgring 24-Hour Race will be extremely demanding on the new 2015 WRX STI NBR car and drivers Hisahiro Yoshida and Kota Sasaki. Here’s a chance to meet the STI team and see the all-new 2015 Subaru WRX STI NBR race car up close. But the application deadline is approaching soon and ends on May 11. Go here to register.