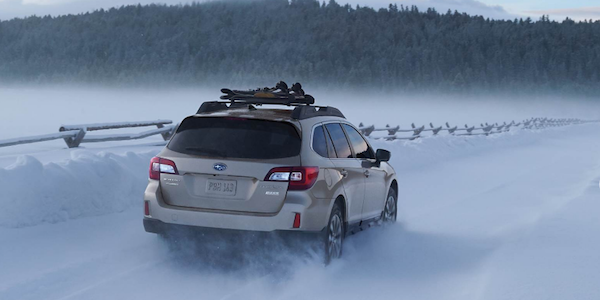 How does the family-oriented Subaru Outback wagon keep scoring Best "All-Terrain” vehicle? It's more than a family hauler.
Advertisement

The 2017 Subaru Outback is the top-selling vehicle in Subaru of America’s stable, and it’s the top wagon in Russia for getting away from civilization. The 2017 Outback scores the best wagon award in the "All-Terrain" category for the second year in-a-row in the “Russia Car of the Year" National Awards. Why do the Russians keep picking it as the best “all-terrain” vehicle?

With a multitude of AWD vehicles on the market, you would think there would be more popular all-terrain SUVs picked over a family wagon. One of Subaru’s core values that sets the Japanese automaker apart from the rest of the family vehicles is their “go-anywhere” attitude. The 2017 Subaru Outback is a popular choice by the Russian people who like its all-wheel-drive capabilities in the cold north regions of the country. It grips the snow and ice and delivers the family safely to their destination. All Outback models come equipped with the X-Mode system that gives it improved off-road capabilities.

Russian motorists choose the best cars in 23 classes and a number of other special nominations each year. The annual "Car of the Year” award in Russia, draws the largest number of participants for a car competition not only in Russia but anywhere around the globe. The winners are determined by popular vote, and this year, the voting was done by close to one million people (972,307) from 86 regions in Russia. This isn’t the only All-Terrain award for Outback.

Many "All-Terrain" awards for Subaru Outback

In Russia, the multi-purpose wagon has once again confirmed its status as the best in its segment for getting away from civilization. It's more than a family hauler. This is not only the second Best "All-Terrain” award in-a-row for the Subaru wagon, but the family-oriented Outback also scored the award in Russia in 2011, 2007 and 2005. The wagon also received the "SUV of the Year” award in the automotive journalists annual “Professional Award" in 2008, 2007, 2006 and 2005.

Last year, the Outback also won the popular vote from readers of the "At the wheel” Grand Prix magazine in Russia. More than 20,000 readers of the Russian magazine chose the best of the best winners. The Subaru wagon received the largest number of votes and was chosen the best for its “outstanding technical characteristics.” Those technical characteristics would include the vehicle’s Boxer engine, its Symmetrical all-wheel-drive system, X Mode off-road system and its safety features. Go to Page 2.

The 2017 Subaru Outback is more than a family grocery-getter and is a popular choice by the Russian people who like its all-wheel-drive capabilities in the cold north regions of the country, and its versatility as a family hauler. It wins the best vehicle award in the All-Terrain category again. It’s the most popular wagon in the U.S. and a popular vehicle for getting away from civilization all around the globe.