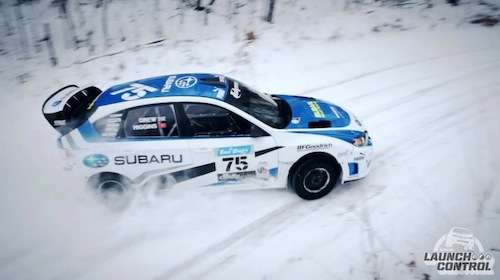 When the 2013 Subaru WRX STI battles the harsh conditions at the Sno* Drift National Rally in Michigan, it helps the everyday driver in a big way.
Advertisement

The Rally America series is gaining in popularity among race fans, but what does it really mean for the everyday driver? Well if you live in cold climates or even drive on wet slippery roads it means a lot. Most automakers enter racing for two reasons: they get exposure to their brand and they also learn valuable lessons from the race cars that give them insights on how to improve their production vehicles that we drive everyday. So what did Subaru learn in Michigan at the Sno* Drift National Rally?

Subaru has launched a new video series called Launch Control. In this episode, the Subaru Rally Team USA reunites in Michigan for the 2013 Sno*Drift Rally. The race consists of 243 miles of snow covered roads without the use of studded tires. With 22 different stages, there are many opportunities for mistakes. This is the only snow-drift challenge of the season and the team only gets one chance to get it right. But it’s more than just racing because Subaru engineers get a chance to see the Subaru Symmetrical all-wheel drive system put to the extreme test.

This benefits the everyday driver with technology that is transferred to the production vehicles we commute to work in and drive every day. David Higgins is the lead driver of the 2013 Subaru WRX STI rally race car and drives the performance car on a variety of surfaces and weather conditions throughout the race. Their goal is to beat the competition.

Ken Block is the reigning champion and will not be easy to beat, and the Canadian team of Antoine L’Estage is back to challenge. But the story of the season started in Vermont where the car is getting ready for the season and in Wales where David Higgins trains. And this team knows what it takes to win a championship. Subaru’s 2012 Rally America championship victory marked their second in a row and their six in seven years.

Subaru gets great exposure from the race and especially if the team win wins. But the Japanese automaker has another goal to see how the WRX STI performs and see how they can improve on the already successful all-wheel-drive system. We get to benefit from the lessons learned as the new technology is applied to cars of the future. This happens in every form of racing as manufacturers learn valuable information from the race cars.

In this episode of “Launch Control”, the Subaru Rally Team USA prepares for the race season and reunites in Michigan for the 2013 Sno*Drift Rally. The one-off ice and snow event provides a unique challenge for the team, where just a small mistake can be costly. Holding a slim lead into the night stages on Day 1, David Higgins and Craig Drew find out how treacherous these roads can be.

The difficult conditions are the perfect proving ground to test the 2013 Subaru WRX STI Symmetrical all-wheel-drive system. The trick is to keep the performance WRX STI on the road. We all benefit from the race series as Subaru gains valuable insights from the race car.

In Episode 2 of 'Launch Control,' Subaru Rally Team USA has to battle harsh conditions and familiar foes. Watch it now:

Tesla Contemplates A New Strategy for China Retail even As Sales Boom
Jay Leno on Elon Musk & EVs: “I Think He Should Get ... Credit"
END_OF_DOCUMENT_TOKEN_TO_BE_REPLACED