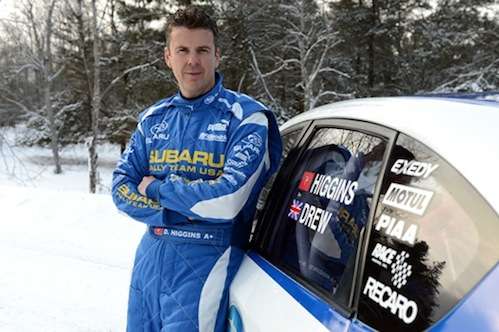 The 2013 Subaru WRX STI driven by David Higgins took second overall in the first Sno*Drift Rally race after being put back together with duct tape and a co-drivers shoe laces.
Advertisement

The first race of the 2013 Sno*Drift Rally brought some exciting action from the Subaru team of Davis Higgins and Co-driver Craig Drew while driving the 2013 Subaru WRX STI. Higgins crashed his WRX STI on stage six during the Sno*Drift Rally’s first day where he slid wide and impacted a tree, damaging the front corner of his race car. The team thought the rally was over, but they were able to bring the Subaru back to life and continued with some inventive roadside repairs including duct tape and the shoelaces from Co-driver Craig Drew’s PUMA shoes!

Although the Subaru team lost valuable time during stage six, the duo was able to carry-on and even managed to set the fastest stage times on the subsequent two stages before limping in to the service park for much needed repairs to the WRX STI. The 2013 Sno*Drift Rally, round one of the 2013 Rally America National Championship, turned in to an “epic seesaw battle” between defending Rally America Champion David Higgins in his Subaru WRX STI and his arch rival, Canadian Rally Champion Antoine L’Estage.

The two-day rally saw Higgins either win or tie eight of the event’s 20 stages while trading the lead three times. Higgins and the Subaru team settled for second place overall after L’Estage pulled past the 2013 WRX STI to win the rally by just 6.2 seconds. The battle between the two drivers saw Higgins end the first day just 0.5 seconds ahead of L’Estage. The Subaru WRX STI was able to retain its lead for most of the second day, but the final stage saw L’Estage overcome Higgins small 1.4 second lead in the final stage to steal the victory in the first event of the season.

Higgins and the Subaru team are already looking forward to the rematch with L’Estage at the next six Rally America rounds. Higgins said, “You always learn from events but the only way I am going to feel better is to get revenge at the next rally!” And if weren’t for the accident on stage six, The Subaru team would likely have cruised on to victory. “We were so lucky to even be in the rally after that, let alone in the lead at end of day,” explained Higgins. The duct tape and shoes laces saved the day and the 2013 WRX STI was put back together enough to continue the stage.

Lucky to even be in the race

The 47th running of the legendary Sno*Drift Rally started well for the Subaru team and they had the lead before the accident. Higgins was just happy to be in the race at that point. He explains, “The rally started very well on first day and just when we built a bit of a lead we had the accident on stage six. “On the second day we made a few small mistakes which cost us time. We tried to be very careful in the last two stages, to avoid mistakes again, but maybe I was too cautious while Antoine [L’Estage] was on full attack. It was a fantastic battle to be part of and great for the championship but one I would have rather won!”

The first event of the season was held in Northern Michigan near the towns of Atlanta and Lewiston. The course comprises 130 miles of twisting, tree-lined, ice and snow covered roads in the northern Michigan forest. The Sno*Drift Rally rules limit the cars to standard tires without the benefit of studding or spiking their tires. The course in the snow is challenging even for the best drivers and truly tests their skills.

Higgins and his 2013 Subaru WRX STI will get a re-match with L’Estage at the Rally in the 100 Acre Wood next month. The second event will be held February 22-23, based in the Ozark foothills of Missouri.

LG's New EV Battery Plant Is a Welcome News for Tesla
Tesla Giga Berlin's New Hurdle: It's Not Only the Gov't, but Now Tesla Itself
END_OF_DOCUMENT_TOKEN_TO_BE_REPLACED