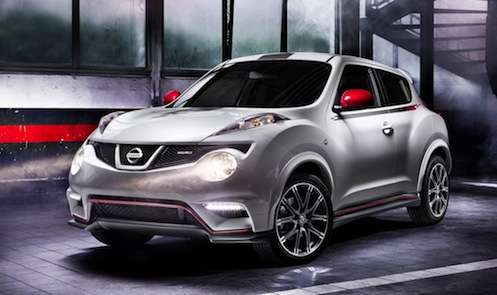 The 2013 Nissan Nismo Juke is on display at Le Mans and the production version will be coming to the U.S.
Advertisement

The 2013 Nissan Juke Nismo will be introduced in Europe first starting in January 2013. The U.S. launch in Japan and the U.S. will be sometime after, and the official details will be made available closer to the European launch. The radical performance crossover will be making its first public appearance this weekend along side the Nissan DeltaWing and Juke-R.

Nissan Juke Nismo the first in a series

Nissan Motorsports International Co. Ltd (Nismo) is Nissan’s exclusive performance brand and uses its motor sport activities to develop performance vehicles that eventually make it to production. The racing division was established in 1984 and has developed other vehicles like the Nissan GT-R and GT3. Nismo has also developed the Leaf Nismo RC, which is the world’s first all-electric race car that ran last year at Le Mans.

The performance crossover Juke Nismo is the first in a series of new Nismo models that Nissan is planning for the future. The Japanese company began the goal of bringing new performance models to market with the introduction of the all-new 545 hp Juke-R which we reported on last month. The Juke-R was originally intended to be a one-off concept, but because of its huge acceptance, has now been put into limited production.

Look for Nissan and their performance division Nismo to bring more radical models to production in the future. Andy Palmer, Executive Vice President Global Product Planning, says "The introduction of Juke Nismo further cements our dedication to provide innovation and excitement for everyone. The Juke, with its radical design and pioneering attitude, is the natural choice to be one of the first Nissan models to receive the mythical performance and distinctive design treatment from our Nismo specialists."

Nissan is continuing to expand its product range into the performance area and the 2013 Nissan Juke Nismo will bring sports orientated handling, performance and excitement to the Nissan lineup.

Juke gets the Nismo treatment

The Juke Nismo gets a performance-tuned version of its 1.6-liter direct injection turbocharged engine, which was directly inspired by the one used in the DeltaWing Le Mans race car. Exact horsepower details have not yet been announced. We do know the Juke Nismo will feature a stiffer suspension and a unique body kit designed to reduce lift at high speeds. A special torque vectoring system will also be offered, helping to improve grip and cornering ability.

Inside, the Nismo treatment continues with a special sport steering wheel, pedals, gauges and other interior trim. The sporty Juke Nismo will also come with sport seats with red stitching and extra bolstering for spirited driving through the corners. The radical new crossover will definitely offer the kind of performance to make you smile.

Look for the 2013 Nissan Juke Nismo to make its European launch in January 2013 and is expected to arrive in U.S. showrooms shortly after. And it looks like there will be more performance models coming from Nissan in the future.

Tesla Giga Berlin's New Hurdle: It's Not Only the Gov't, but Now Tesla Itself
Teslas Are Sold Out Until 2023, But The Timing May Reverse
END_OF_DOCUMENT_TOKEN_TO_BE_REPLACED