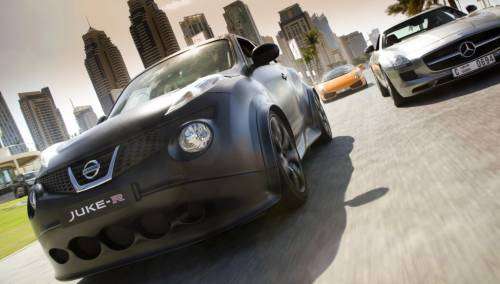 Nissan has just announced the official production of a 545 horsepower 160 mph Juke-R that will star in its own movie.
Advertisement

When the Juke-R made its global debut in Dubai earlier this year in January, the 3.8-liter,160 mph concept car attracted enormous attention. Nissan received three orders for cars to be built, and Nissan says two have come from a well-respected member of Dubai society. Nissan announced today the official production of the Juke-R.

The production cars will still use a twin-turbocharged V-6 engine that comes in a GT-R supercar, but the new Juke-R will get a much more powerful engine from the latest 2013 GT-R. The concept car produced a measly 485 horsepower, while the new Juke-R will pump out a mind-numbing 545 horsepower. The car is said to still have a top speed of 160 mph like the concept, but with the additional horsepower, it could be even more.

The announcement by Nissan said the Juke-R crossover will be made available to buy in a very limited run on a build-to-order basis. Nissan will be taking orders to build more of the super crossover’s upon request in the next four weeks.

Gareth Dunsmore, Marketing Product Manager for the Juke, said: "The Juke-R was originally intended as a one-off concept to marry two of Nissan's most innovative models. But the reaction we had to the car in Dubai was amazing - people were making offers for the original on the street!

The original Juke-R was based on the MY10 GT-R running gear, but the new 545 horsepower model will feature the updated drivetrain and chassis from the MY12 GT-R. The GT-R drivetrain will have to be shoehorned in to the Juke-R somehow by engineers, and should prove to be a challenge since the GT-R has a shorter but wider overall footprint than the Juke.

Other modifications on the body will include the Juke-R getting wider wheel arches, a full body kit and a fixed rear roof wing. The car will get GT-R 20-inch wheels, and Brembo brakes on all four corners. Inside the Juke-R will feature a custom roll cage, the GT-R's touch-screen interface, a 4WD controller, and an engine control system.

The Juke-R's announced production was made during the presentation of a cinematic online movie starring the high-performance crossover and Nissan’s inaugural GT Academy winner, Lucas Ordonez. The short movie, Desert Nemesis, follows Ordonez as he blows away some of the world’s best supercars like the Lamborghini Gallardo, Mercedes-Benz SLS AMG and a Ferrari 458 Italia.

The first three cars are already being built, and should be delivered to their new owners later this summer. Anyone interested in owning one of these race-rockets, can go to [email protected] to register, but be ready to shell out close to $200,000 to get one.

To coincide with the announcement, Nissan launched a cinematic online movie at http://www.facebook.com/NissanJukeOfficial, in which the Juke-R stars.

Check out the Nissan Juke-R video.