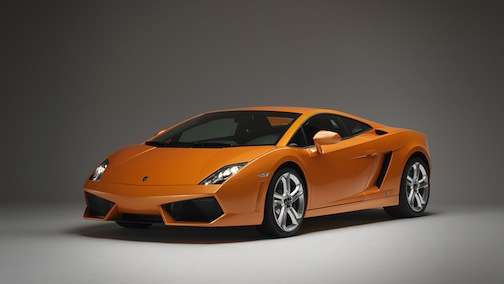 Celebrity chef Guy Fieri’s Lamborghini Gallardo was found by authorities more than a year after it was stolen when investigating a teen suspected of a drive-by shooting.
Advertisement

Guy Fieri had an incredible weekend, especially after police recovered the chef's stolen Lamborghini after it was heisted Mission Impossible style from a Bentley, Lamborghini, Lotus dealership in S.F. over a year ago. The thief climbed onto the roof of the dealership, attached a rope, and then lowered himself into the showroom and then got the keys to the car.

The $200,000 Lambo Gallardo wouldn’t be an easy thing to sell being one of the most exclusive, distinctive looking vehicles in the world. And the bright yellow paint would make it even more conspicuous. “Not the sort of thing that peddles easily on a used car lot or in the want ads”, investigators noted when the car was first stolen.

But the story gets weirder when the Marin County Sheriff's Dept. found the car unharmed in a storage container. According to Patch, while investigating a drive-by shooting, a 17-year-old boy was arrested on a gun charge and then decided to look in a storage unit belonging to the teen.

When police opened up the unit, they found a motorcycle, and other items believed to be involved in the shooting. That’s when police also noticed the 2008 Lamborghini Gallardo Spyder. After checking out the VIN, they traced the car back to Fieri. San Francisco police spokesman Officer Albie Esparza confirmed that the Lamborghini found in the storage unit was the same one stolen from the dealership.

Reports say the 17-year-old is a "person of interest" in the theft and the case is still under investigation. But Fieri will have to wait before he gets his yellow Lambo back, the car is currently being held by the Marin County Sheriff's Dept. because it’s considered evidence in the case. But a judge is likely to release the vehicle back to Guy in the near future.

Fieri said, "I would like to thank the Marin County Sheriff's office and the Mill Valley Police Department for their hard work and effort in the recovery of my car." He added, "I'm glad we can put this behind us, and feel better knowing that justice is being served."

Fieri has to feel like one of the luckiest guys alive, but he might want to put a tracking device on his car when he finally gets it back.

Tesla Contemplates A New Strategy for China Retail even As Sales Boom
Jay Leno on Elon Musk & EVs: “I Think He Should Get ... Credit"
END_OF_DOCUMENT_TOKEN_TO_BE_REPLACED