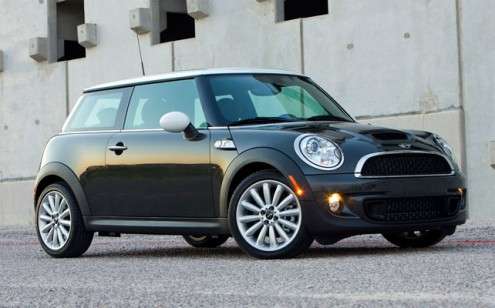 The Guinness World Record for Tightest Parallel Parking was broken last week in China, when a MINI managed to squeeze between two MINIs with only 15 cm to spare.
Advertisement

Parallel parking has to be one of the hardest driving skills to try to master. Some drivers can’t even pull into a parking spot in a lot without getting too close. And now we have electronic parking assist systems in cars that will perform parallel parking for us with a touch of a button. And they aren’t just for luxury car owners anymore, but are available on the Ford Focus with Active Park.

Yet, what MINI did in China was totally incredible. China’s Han Yue, set out to show that human beings can do some things machines will never be able to do. MINI recently held a promotional event in China for the debut of a new version of its hatchback called "The Chinese Job." In a brilliant marketing job, the car was used to set the Guinness World Record for the tightest parallel parking job. Two professional drivers were used to set the record and they made it appear easy.

The drivers pulled off the incredible feat by using a nifty handbrake maneuver to slide the car into place. The first Chinese driver to make an attempt set the new record at a combined distance of just 21 centimeters left using his MINI hatchback sliding it between two Clubman models. Not to be outdone, the second driver takes the same car and proceeds to slide the MINI between the Clubmans and breaks the record again at 20 cm.

The competition continued in single centimeter intervals with the two Chinese drivers until the new Guinness world record was set at just 15 cm (5.9 inches). An official representative from Guinness World Records was on hand to certify the new record. The Chinese driver who broke the record by sliding the MINI into the tiny spot was Han Yue. The previous record of 21 cm was set by Patrik Folco in Italy just a little more than a month earlier.

Ford pulled off a similar marketing campaign for their Ford Focus Active Assist feature, by using a giant pinball game in Paris to bring attention to the new car. Driving in Paris can be a tough proposition, but trying to find a parking spot in the French capital is next to impossible.

Ford of Europe hired the ad agency, Ogilvy of Paris, who came up with an over-the-top promotional piece to bring attention to the new Ford Focus in Europe. The ad agency says, “just having great ideas aren’t good enough for us anymore, we want to come up with inventive great ideas.”

Maybe MINI took inspiration from what Ford did in Paris by using a live demonstration to get the Chinese buyers to look at the new special edition MINI.

Watch the impressive 2012 MINI parallel parking job below along with the life-size Ford pinball parking game.

danwat1234 wrote on June 30, 2012 - 11:23pm Permalink
That was great. Genius! I would have liked to have been on the engineering team putting that system together.