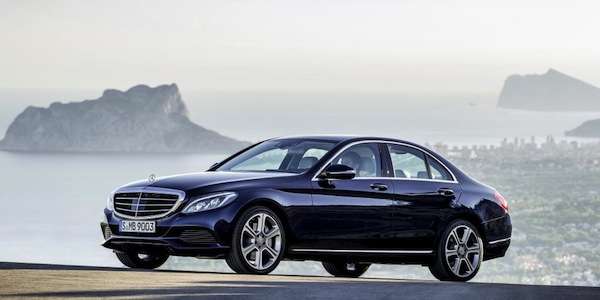 The global 2015 Mercedes C-Class will stay the volume leader

The new 2015 Mercedes-Benz C-Class is about to launch here in the U.S. The new C-Class will stay the volume leader.
Advertisement

Mercedes-Benz reports record sales for June worldwide with sales of 142,136 units, an 8 percent increase. One big reason is the success of the Mercedes C-Class luxury sedan. It’s the lowest price sedan next to the new CLA-Class compact four door coupe, and it is the volume leader here in the North American market. The new 2015 C-Class will launch here in the U.S. this September, and the new luxury sedan will stay the leader.

Another record year for Mercedes

Mercedes is on track to see another record year, and the new-generation 2015 C-Class will be a big reason why. Since the beginning of the year, Mercedes-Benz has sold over 783,520 vehicles to customers (+12.8 percent) and can thus count on the best unit sales result in any half year in the company’s history to date.

Ola Källenius, Member of the Divisional Board Mercedes-Benz Cars responsible for Marketing & Sales said, “The first half of the year was extremely successful for us”, said Ola Källenius, “With the unit sales of our vehicles, we are on track to make 2014 into yet another record year.”

The 2015 Mercedes-Benz C-Class is a global car and will now be built for the very first time here in the U.S. Mercedes-Benz has started production of the new 2015 C-Class in the U.S., in Tuscaloosa, Alabama. C-Class is truly a global car for the brand and will be built in three locations around the world. Mercedes will build the new C-Class in Alabama for the first time at its third location in the global C-Class production network.

Mercedes is ramping up production on a global scale in Bremen, Germany (February), East London, South Africa (May), and now Tuscaloosa. The German automaker will also begin C-Class production at a location in Beijing, China that will begin manufacturing shortly. The new C-Class sedan will come on the Chinese market in September. Mercedes- also just launched the new 2015 C-Class Estate in Europe.

The new 2015 Mercedes-Benz C-Class luxury sedan, which is the volume model in the North American market, will remain the leader and launched here in September.