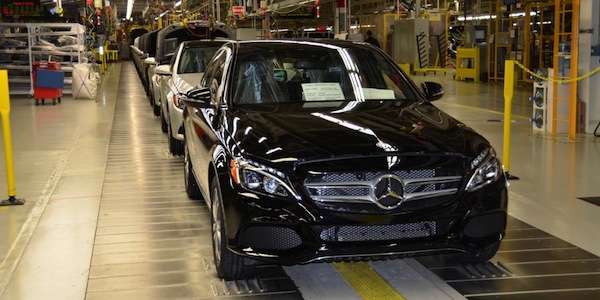 How Mercedes ensures top quality in the global 2015 C-Class

The all-new 2015 Mercedes C-Class is made in U.S. plant for the first time. Can Tuscaloosa workers master the new sedan?
Advertisement

The 2015 Mercedes-Benz C-Class is a global car and will now be built for the very first time here in the U.S. Mercedes-Benz has started production of the new 2015 C-Class in the U.S., in Tuscaloosa, Alabama. C-Class is truly a global car for the brand and will be built in three locations around the world. Mercedes will build the new C-Class in Alabama for the first time at its third location in the global C-Class production network.

Mercedes is ramping up production on a global scale in Bremen, Germany (February), East London, South Africa (May), and now Tuscaloosa. The German automaker will also begin C-Class production at a location in Beijing, China that will begin manufacturing shortly.

In order for the U.S. plant workers in Tuscaloosa, Alabama to learn how to produce the new 2015 C-Class, they had to undergo extensive training in Germany. The German automaker sent many lead team members to their Bremen, Germany plant that is their so-called lead plant. This plant controls global production of the new C-Class.

To ensure global quality of the new 2015 C-Class, Mercedes uses one plant to be the lead in this training. They teach workers everything form the tooling strategy to the training of the colleagues from the international plants to production quality. This gives the German automaker the ability to ensures top quality at all production sites from the outset.

Mercedes shows just how committed they are to ensuring this top quality in the C-Class and says 500 employees worldwide were sent to Germany for the extensive training. 100 of those were from Tuscaloosa who completed intensive training in Germany in order to pass on their knowledge as multipliers in their home plant here in the U.S.

Jason Hoff, Head of the Mercedes-Benz Tuscaloosa plant: "Many of our Team Members have spent weeks and months in Germany getting to know the C-Class and the technologies associated with this product. Thanks to our highly qualified and motivated team, we are optimally prepared to write the next chapters of our success story 'made by Mercedes-Benz in Alabama'."

With this intensive training, it looks like the Tuscaloosa, Alabama team is ready to start production of the all-new 2015 Mercedes-Benz C-Class sedan. Look for the market launch of the new C-Class here in the U.S. and Canada in the fall.

Other 2015 Mercedes-Benz C-Class stories of interest.
6 design elements on 2015 C-Class you don’t want to miss

Elon Makes a Cybertruck Statement With an Action, But Quiet in Words
Tesla's Record Month in China: Doubled Registrations in March 2021
END_OF_DOCUMENT_TOKEN_TO_BE_REPLACED