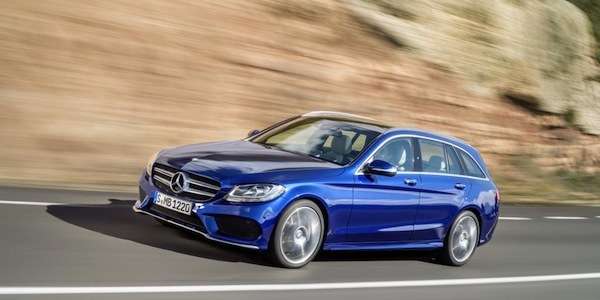 The all-new 2015 Mercedes-Benz C-Class Estate is announced by Mercedes. How does it accomplish more with less?
Advertisement

The new 2015 C-Class Estate has been announced by Mercedes-Benz and it comes with a number of new things that set it apart. Customers can choose from two new front grilles, a sports grille or reserved solely for the EXCLUSIVE Line, a luxury grille with the Mercedes star on the bonnet. But its the new C-Class Estate’s interior that is making news.

It’s everything you would expect in a Mercedes-Benz interior with comfort and luxury, but the new C-Class Estate’s cabin grows considerably larger. It comes with an 80-millimeter increase in the wheelbase (2840 millimeters) compared with the previous model, the vehicle is 96 millimeters longer and 40 millimeters wider.

This translate to an increase in legroom of 45-millimeters, primarily in the rear seat. There is also more interior width and headroom than before. There is also more cargo room with the new C-Class Estate providing a maximum load capacity of 1510 liters (according to ISO 3832), which is ten liters more than the previous model. The load compartment volume behind the rear seats has increased by five liters to 490 liters.

Mercedes does more with less

The new C-Class Estate gets bigger but weighs less thanks to innovative solutions in the bodyshell. The new Estate gets an aluminum content of 49 percent and a gross vehicle weight that is now up to 65 kilograms less. This now makes the 2015 Estate the lightweight construction leader in its segment.

Another new feature is the touchpad in the new 2015 C-Class Estate developed by Mercedes-Benz. As on a smartphone, all the head unit functions can be operated using finger gestures. There is also a head-up display which puts important information directly in the driver's field of vision.

Mercedes-Benz is also the first German premium automaker to bring Apple's “CarPlay” infotainment system into cars, and it makes its debut in the 2015 C-Class. The new software is based on the iPhone and Mercedes-Benz is one of the first automakers along with Ferrari and Volvo to be trendsetters in smartphone integration.

The all-new 2015 Mercedes-Benz C-Class Estate is available in Europe stating this September. The Mercedes-Benz innovative engineering allows the new wagon to grow bigger, but it also gets lighter in the process.