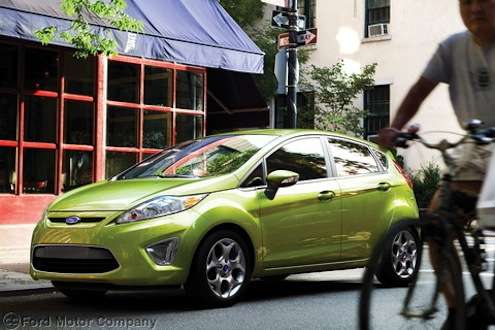 The new 2013 Ford Fiesta is on a march to be a global game-changer and makes its Asian debut at Auto Guangzhou 2012 in China.
Advertisement

The new 2013 Ford Fiesta is the best-selling small car in Europe, has a fuel-stingy 1.0-liter engine, the latest technology and is becoming a global game-changer for Ford around the globe. The new Fiesta is making its Asian debut in the largest auto market in the world as it's being unveiled for the Chinese at Auto Guangzhou 2012. Ford is expecting big things for the new Fiesta in China and the unveiling there could launch the compact car into global status as the top-selling small car in the world.

The small compact Fiesta from Ford just continues to impress as it offers a fuel-efficient engine and the latest technology that buyers are looking for. It comes with Ford’s new MyKey technology that enables parents to program a key that restricts the top speed of the Fiesta, reduces the maximum volume of audio system, and even disables the audio system altogether if their teenage kids and passengers are not wearing seat belts.

It also comes with a new safety system called Active City Stop that can capture and process 15 images in the time it takes to blink. Even the most attentive driver can miss what it going on around the car and be involved in an accident. The new safety feature automatically applies the brakes and can help mitigate or prevent low-speed collisions.

The new Fiesta is sure to attract Chinese buyers with its new 1.0-liter EcoBoost engine. The new three-cylinder engine from Ford was used first in the European Ford Focus and will be offered in the C-MAX and B-MAX in Europe later this year. The fuel-efficient engine has been wildly accepted in Europe already in the Focus, and was just introduced in the U.S. model. The small fuel-efficient engine has been highly acclaimed and gets excellent fuel-mileage.

Ford has experienced strong sales in China and the introduction of the new Fiesta should continue its advance in the world’s largest auto market. Ford posted its second consecutive sales record in China last month in October. The Ford Focus led all sales there and the new Fiesta could move into Ford’s number one spot next year.

Ford is counting on continued success in China, and the new Fiesta is a big part of those plans. Ford has increased investment into new manufacturing facilities with its joint venture Changan Ford Mazda Automobile already operate two assembly plants in Chongqing. The plant in Chongqing is the largest global manufacturing location for Ford outside Michigan. Ford already has five manufacturing facilities in China that are currently operating, and together with its partners, it is building five more.

Ford announces it will offer Emergency Assistance for free

Ford is also introducing the all-new Kuga and all-new EcoSport are part of Ford’s plan to broaden its offerings in China with the introduction of 15 new vehicles and 20 new engines and transmissions by 2015. Debuting in China on the all-new Ford Kuga, Ford is announcing that it will provide customers with an advanced system that automatically informs the emergency services via a dedicated call center in the event of an accident. Ford is the first automaker to provide this feature for free for the life of the vehicle.

With the introduction of the new 2013 Ford Fiesta in China, look for the compact car to be a global force that could be the number one selling car in the world.