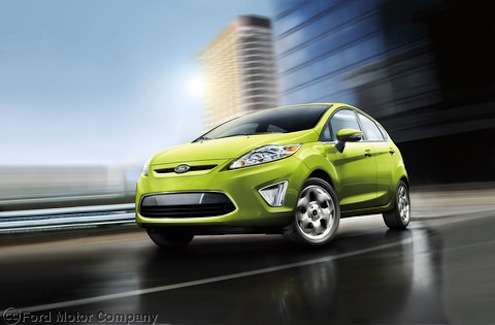 If you blink 2013 Ford Fiesta has you covered

Ford has introduced a new Active City Stop safety feature on the 2013 Ford Fiesta that can process 15 images in the blink of an eye and help avoid accidents.
Advertisement

The Ford Fiesta is having a huge impact on the European market and is the number one selling small car across the pond. The little compact car was Europe’s best-selling car in September, for the third quarter and for the first nine month’s of this year. With a new safety feature called “Active City Stop,” the new 2013 Ford Fiesta is sure to continue to be Europe’s most popular compact car. And with the new safety system that has been introduced on the new Ford Fiesta, it will also be the safest commuter car on the planet.

The new Active City Stop safety system can capture and process 15 images in the time it takes to blink. In the time it takes to blink, even the most attentive driver can miss what it going on around the car and be involved in an accident. By the time they have opened their eyes, the new Ford Fiesta will already have captured and processed 15 images of the road ahead in search for potential hazards.

Active City Stop uses a sophisticated light and range detecting sensor that scans the road ahead continually 50 times every second. This is twice the speed of the movie industry standard frame rate. The new system on the Ford Fiesta will help prevent collisions at speeds up to 9 mph, and help reduce the severity of impacts at speeds of up to 18 mph.

This is particularly useful in city stop and go driving where the driver is likely to be looking away while traveling at low speeds. Many drivers are paying less attention and are tempted to use the slow speeds to attend to their cell phone. This is the time when many drivers are rolling forward at low speeds and fail to notice the car ahead has come to a complete stop.

Florian Schweter, new Fiesta Active City Stop development engineer, Ford of Europe said, “High traffic volumes, lots of potential distractions and slow-moving, stop-start traffic mean Active City Stop can provide a much-needed extra eye on the road.” Most of us who have driven in the city have experienced a near rear-end collision due to this scenario. The Ford Fiesta is the ideal car to have the new safety system, as most of the compact cars will be purchased in large urban areas for city commuting.

Active City Stop will constantly monitor the gap to vehicles in front and will automatically apply the brakes if the driver fails to respond to a stationary or slower moving object by braking or evasive steering. The safety system also reduces engine torque, and activates the rear hazard lights.

The system was first launched on the new Focus and has been a popular option on the Eoropean model as 70,000 European customers have ordered the safety feature. Active City Stop is already available on C-MAX, Grand C-MAX and the new B-MAX. It received a Euro NCAP Advanced reward on the Ford Focus in 2011. Ford hasn’t announced when the new system will be available in the U.S. market, but it’s sure to be a hit here also.

The all-new 2014 Fiesta gets more technology

Ford has revealed the all-new 2014 Fiesta that will get even more technology. The new enrty-level compact will also feature Ford’s SYNC in-car connectivity system that includes Emergency Assistance, which directly connects the vehicle occupants to local emergency services operators after an accident, in the correct language depending on what region the car is located.

European models will also feature the first-ever MyKey for this segment, which will enable parents of teenage drivers the ability to configure maximum speed and audio volume limits. It can also mute audio levels until seat belts are fastened. MyKey also keeps safety systems from being deactivated by younger drivers.

The new 2014 Ford Fiesta will also feature the new 1.0-liter EcoBoost engine that is expected to deliver best-in-class fuel economy. With the new technology and Active City Stop, look for the new Ford Fiesta to make a big impact globally.

LG's New EV Battery Plant Is a Welcome News for Tesla
Tesla Giga Berlin's New Hurdle: It's Not Only the Gov't, but Now Tesla Itself
END_OF_DOCUMENT_TOKEN_TO_BE_REPLACED