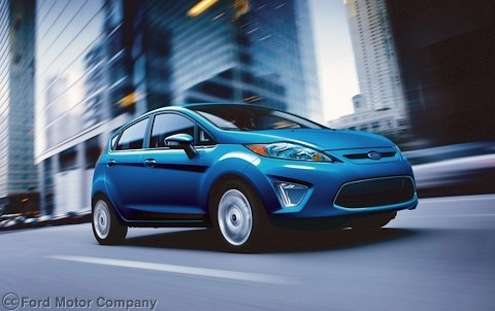 Parents of young drivers will love the new Ford Fiesta

The new 2013 Ford Fiesta debuts in Europe with a new feature called MyKey that parents of young drivers will be excited about.
Advertisement

Parents of young drivers will be excited about Ford’s new MyKey feature that debuts in Europe on the new Ford Fiesta. The compact car will be the first in Europe to feature Ford’s MyKey technology, which enables parents to place restrictions on younger drivers. The new Ford Fiesta could be the safest new compact car in the world and features a number of new safety features. The Fiesta has been a big hit in Europe and the little compact car was Europe’s best selling small compact car in September, for the third quarter and for the first nine month’s of this year.

Fords new MyKey technology enables owners to program a key that restricts the top speed of the Fiesta, reduces the maximum volume of audio system, and even disables the audio system altogether if driver and passengers are not wearing seat belts. This helps parents with younger drivers who typically take more risks while driving.

Ford took a survey of more than 6000 parents in Europe and found that 53 percent of the parents of young drivers would be more likely to allow a teenage son or daughter to drive their car if it was equipped with MyKey technology. “All parents know that if teenagers are experts at one thing it’s finding ways of getting into trouble,” said MyKey European system architect, Peter Patzelt. “MyKey allows Fiesta owners to set sensible restrictions for young drivers, and delivers peace-of-mind for parents.”

A standard feature on many Ford vehicles

The new MyKey technology was first introduced by Ford in the U.S., and is now standard on most new North American Ford vehicles. Ford says they plan to roll out the new technology across its European product line-up by 2015. MyKey works by recognizing different keys for the same car and then parents can set the vehicle settings according to the specific driver. It also enables owners to program chimes to sound at set points between 44-87 mph and prevents seatbelt reminders from being disabled and delivers an earlier low-fuel warning. It also can prevent the driver from deactivating safety technologies such as Electronic Stability Control and Active City Stop, which can help mitigate or prevent low-speed collisions.

Ford also has a new safety system called “Active City Stop” on the new Ford Fiesta. The new Active City Stop safety system can capture and process 15 images in the time it takes to blink. In the time it takes to blink, even the most attentive driver can miss what it going on around the car and be involved in an accident. By the time they have opened their eyes, the new Ford Fiesta will already have captured and processed 15 images of the road ahead in search for potential hazards.

The new Ford Fiesta is popular in Europe and the new MyKey features will give parents piece of mind as their teenage kids get behind the wheel. “Parents love MyKey because it helps them reduce their teenagers’ exposure to risk at the wheel,” Patzelt said. “Young drivers are not too keen on MyKey until they learn that it often improves the chances their parents will allow them to drive in the first place.”

The new 2013 Ford Fiesta is becoming a global game changer for Ford as it has more safety features than any compact car on the market.