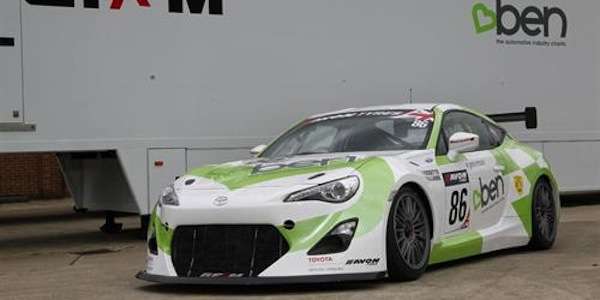 Fans in the UK can #getontrack with the 2015 Toyota GT86 GT4 racer at the 2015 Avon Tyres British GT Championship. What is #getontrack?
Advertisement

#getontrack is raising funds for BEN, the automotive industry charity, that offers practical and financial help, support, advice and friendship to those who work, or have worked in the automotive and related industries, and to their family dependents.

Richard Williams and Stefan Hodgetts with Team GPRM’s 2015 Toyota GT86 GT4 and British GT are supporting BEN. For a donation in aid of BEN and Racing4MND, attendees can #getontrack after Saturday’s qualifying session and follow the same line as some of the greatest names in motor racing history. Unfortunately, fans won’t be able to drive the Toyota GT86 GT4 around the track.

A new special edition model will join the range this summer, details to be announced soon. The 2016 Toyota GT86 is available to order now with first deliveries to customers in...read more.

The new livery for Team GPRM’s Toyota GT86 GT4 was unveiled at round three of the series held at Rockingham, which has been specifically designed for the car. “Team GPRM is very excited about raising awareness and funds for BEN plus the opportunity it presents to our fans,” said Richard Williams. “This will be a dream come true for many and what an amazing experience for people who have always wanted to get on the track where their heroes have raced.

It’s a unique opportunity for motorsport fans in the UK to walk their favorite track and be part of its history and at the same time raise money for a great cause and help those who are in need. They also get to be up close to the 2015 Toyota GT86 GT4 racer and see a great motorsport event.