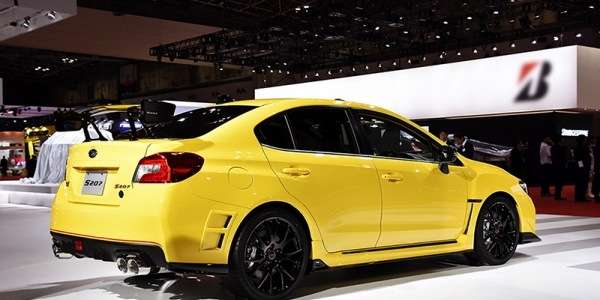 STI unveils the 2016 Subaru WRX STI S207 at the Tokyo Motor Show. How much more hp does the Japan-only STI get?
Advertisement

Performance fans in the U.S. can only look and not touch this limited edition 2016 Subaru WRX STI dubbed the S207. Subaru Tecnica International (STI), the motorsports division of Subaru, will launch a limited-edition 2016 WRX STI S207 in Japan. Only 400 examples will be built for the Japan market and it won’t be available in the U.S. To commemorate Subaru’s victory in the SP3T class in the 2015 Nurburgring 24-Hour Race, STI will also offer just 200 examples of the 2016 Subaru WRX STI with the NBR Challenge Package featuring an exclusive dry carbon rear spoiler and a special NBR ornament.

The WRX STI S207 follows in the tradition of other Japan-only limited edition STIs like the S206 launched a few years ago. The S207 will come with exclusive STI engine and suspension tuning as well as distinctive interior and exterior design upgrades. Underneath, the limited edition STI will be powered by a 2.0-liter turbocharged boxer powerplant and will be tuned to get a maximum power output to 328 PS (323hp).

Inside, the limited edition models will come standard with exclusive STI-spec Recaro bucket seats embossed with the STI logo and customized sports instruments. The S207 will be available in three exterior colors: WR Blue Pearl, Crystal White Pearl, and Crystal Black Silica. STI will also offer a 100-unit limited run of the “NBR Challenge Package Yellow Edition” with a Sunrise Yellow exterior as a special edition model. Subaru begins taking orders on December 1, 2015 for the 2016 Subaru WRX STI S207 and will end March 6, 2016. Performance fans in the U.S. can only look and not touch this limited edition STI.