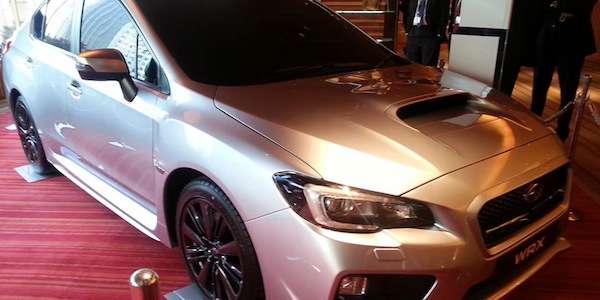 Dynamic 2015 WRX is a finalist for another prestigious global award

The all-new 2015 Subaru WRX is now a finalist for Car of the Year South Africa. Can the WRX win it all?
Advertisement

The new 2015 Subaru WRX has already received a number of international awards, and is now a finalist in the most important automotive event in South Africa. The new-generation Subaru WRX has already received awards for Motor Weeks “Best Sports Sedan” and Australia’s motoring.com.au website, getting the “recommends” awards in the Performance cars under $100,000 category.

Now 2015 Subaru WRX is up for the WesBank SAGMJ Car Of The Year and is the most important automotive event in South Africa. The 2015 WRX has made it as a finalist for the award and is a good candidate to win. The event is judged by a panel of senior motoring journalists across South Africa. While all of the models chosen as finalists are deemed to represent examples of outstanding automotive engineering, there can be only one winner and, in the eyes of the COTY Jury, that model will epitomize all-round automotive excellence.

The winning car needs to reflect passion and excitement

The WesBank/SAGMJ Car Of The Year is South Africa’s most coveted accolade in the motor industry with a complex judging process by respected professionals. Last year, the Porsche Cayman S took the 2014 Crown. The winning car needs to reflect value for money, safety, dynamics, technology, aesthetics, innovation and ingenuity, and evokes automotive passion and excitement. 2015 WRX has already exhibited these characteristics with buyers around the globe.

Judged by a senior panel of automotive journalists

The COTY competition has been sponsored for the past 27 years by WesBank, and competition is unique in the world in that the victor is determined not by popular vote as in most countries, but by actual testing of the finalists to determine whether the cars meet the criteria for COTY honors. The event is judged by a panel of senior motoring journalists across South Africa.

The 2015 Subaru WRX will likely be a favorite. The new WRX has been a big hit with buyers around the globe and selling well. The 2015 WRX now gets a new 2.0-liter powerplant that develops 268 horsepower and 258 lb. ft of torque. The WRX engine is the all-new 2.0-liter FA turbocharged Boxer version of the new Forester 2.0 XT powerplant. But the WRX version uses different cams and higher-rate valve springs and other enhancements to enhance the performance envelope.

The all-new-generation 2015 Subaru WRX has made it to the next round of finalists for South Africa’s most important automotive event, the Car of the Year award. Stay tuned to Torque News for to see if WRX wins another global award.

Tsingshan's Threat to Tesla: EV Maker Is In Battery Crosshairs
Tesla-Funded Research Reveals One of The Biggest Mysteries of EV Battery
END_OF_DOCUMENT_TOKEN_TO_BE_REPLACED