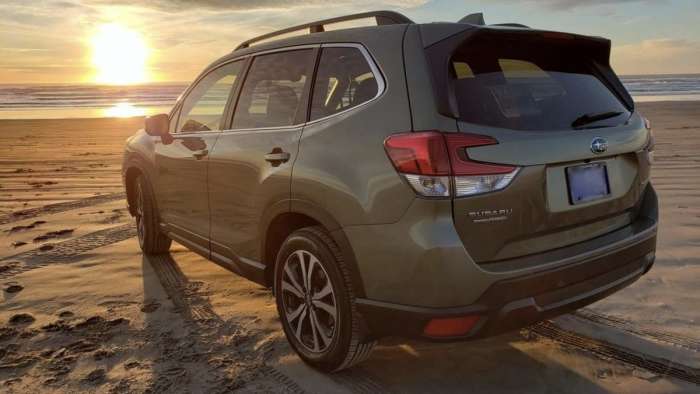 New Subaru Forester is trailing the competition. Is dropping the sporty 2.0XT and 6-speed manual the reason?
Advertisement

When Subaru uncovered the all-new 2019 Forester, they disappointed Subaru enthusiasts when they dropped the Forester 2.0XT turbo model. They were also surprised that the Japanese automaker ditched the 6-speed manual gearbox option on the new fifth-generation SUV. Even though sales of those two models were slow and one of the main reasons for jettisoning both trims, there are other reasons why Subaru Corporation did away with them.

Car and Driver just ranked every Compact SUV from worst to best and the new 2019 Subaru Forester can only muster #6 on the list. In the competitive segment, the Hyundai Tucson, Kia Sportage, Toyota RAV4, Honda CR-V, and Mazda CX-5 all scored ahead of the new Forester. C & D mentioned their disappointment that both models are gone and that the only engine is now a “naturally aspirated boxer-four with a modest 182 horsepower, hitched to a continuously variable automatic transmission.”

The new Mazda CX-5 gets the nod as the #1 compact SUV in the crowded segment by Car and Driver. They lauded the CX-5 for its newly-available 250-hp turbocharged engine upgrade. This is similar to the 250-hp 2.0XT Forester model Subaru just discontinued. Did Subaru make a mistake dropping the sporty 2.0XT trim?

After the Forester launch, Subaru executives explained why they chose the non-turbo route. Company execs said sportiness does not necessarily mean having more power. Tomohiro Ishitobi, Subaru Corporation’s senior general manager for sales and marketing division said, “Our interpretation of sportiness does not rely on engine power.”

You May Also Like: All-New 2019 Subaru Forester Sport vs. Forester 2.0XT Comparison

Subaru believes expressing sportiness in the Forester is more about synergy and how the engine responds to driver inputs and its overall driving dynamics. “There is a way to express the sportiness of the SUV, and that’s what we think we have accomplished with the new Forester. We have prepared a different type of engine, not just the 2.0-liter that we’re launching this time. But regardless of engine displacement, we focused on engine response, it’s the key thing we focused on,” says Ishitobi.

Why Subaru dropped the manual

One of Subaru’s core values is safety, and they won’t compromise it for anything. Subaru ditched the 6-speed manual rower because they made their EyeSight driver assist system standard across all Forester trims, as it’s incompatible with a manual gearbox. The Japanese automaker also says they picked up new customers who had never purchased a Subaru vehicle before because of the EyeSight safety feature. Customers will see all SUV models in their lineup come with EyeSight soon.

If you look at the glass half full, the all-new 2019 Subaru Forester did score ahead of 10 compact SUVs on the long list of sixteen contenders from Car and Driver. We are wondering if Forester would have been in the top three if they still had the Forester 2.0XT turbocharged model. Mazda moves ahead of the pack with their new 2.5T 250-hp 310 lb-ft of torque sporty CX-5.