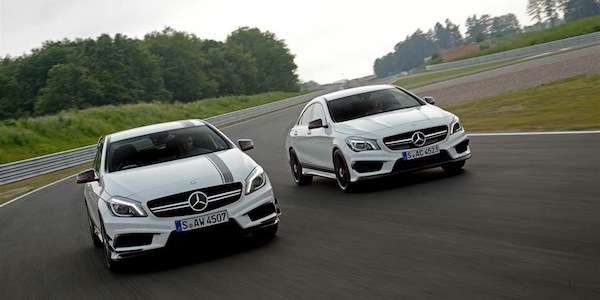 The 2014 Mercedes-Benz CLA-Class and 2015 GLA-Class have won the 2014 International Engine of the Year award in the New Engine category.
Advertisement

This highly coveted 2014 International Engine of the Year award was given to Mercedes-Benz and won by a landslide over engines from BMW, Peugeot and Porsche. The M133 2.0-liter turbocharged four-cylinder Mercedes engine is handcrafted by AMG, the performance division who pumped out the powerplant for Mercedes and comes in the 2014 A45 AMG, 2014 CLA45 AMG and the upcoming 2015 GLA45 AMG.

These cars are winning over a new generation of performance enthusiasts who have never purchased a Mercedes vehicle before. The engine won plaudits from the judges at Engine Technology International magazine for not only delivering in terms of high performance, but also for its low emissions output. Dutch journalist Natan Tazelaar said, “If this is what being environmentally conscience is all about, then there is no reason for complaining. All the noise speed and excitement you could ask for, without the need for a big thirsty lump of metal under the bonnet.”

The new 2014 CLA45 AMG and upcoming GLA45 AMG come equipped with this award-winning AMG four-cylinder engine that pumps out 355 hp and 332 lb.-ft. of torque. This gives the new luxury compacts the world's most powerful four-cylinder engine built in series production. The CLA-Class establishes a new segment for the German automaker and they are attracting a new generation of performance enthusiasts with the car. They are expecting the same with the new 2015 GLA-Class luxury compact SUV.

Will excite even the most ardent performance fan

The AMG power and torque give the CLA45 AMG superb driving performance. The powerful coupe sprints from 0-60 in 4.5 seconds with an electronically limited top speed of 155 mph. That will excite even the most ardent performance fan. The small displacement 2.0-liter AMG engine acts much bigger than anyone would expect, as we experienced on the track recently, and gets a twin-scroll turbocharger, an AMG performance exhaust system, and a high-performance cooling system.

Handcrafted by one mechanic

Each AMG engine is hand built by one tech on an exclusive assembly line in Affalterbach. Each engine bears the name of the responsible mechanic that builds the AMG powerplant. The 2.0-liter engine is mated to an AMG Speedshift DCT seven-speed sports automatic that transfers the power to all four-wheels.

Meet the 2014 International Engine of the Year, the M133, better known as the handcrafted 2.0-liter turbocharged four-cylinder that’s under the hood of the 2014 Mercedes-Benz CLA45 AMG and the upcoming 2015 Mercedes-Benz GLA45 AMG. If you like performance, a low-carbon future doesn’t have to void of high-performance cars.