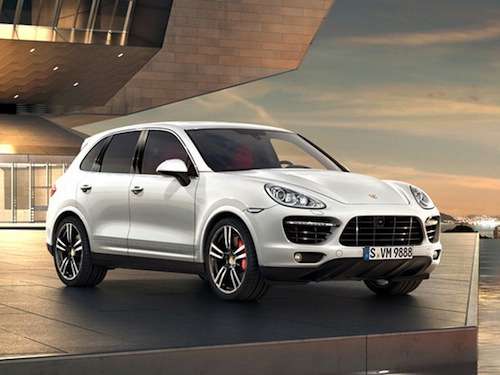 The new 2014 Porsche Cayman and 2013 Cayenne Turbo S will launch this spring and help Porsche keep up their record sales pace.
Advertisement

Porsche announced record January sales of 3,358 vehicles in the U.S. which is an increase of 32 percent. Last January 2012, Porsche sold 2,550 vehicles which included all their sports cars. The U.S. is Porsche’s number one selling global market and has been selling their sports cars, Cayenne SUVs and the Panamera four-door sports sedan. The successful month follows Porsche’s record-setting year in the U.S., with 35,043 vehicles sold in 2012.

The Cayenne SUV has been a very successful model for Porsche and contributed to the record January, with 1,500 Cayenne units sold which was a 51 percent increase over January 2012 numbers. 877 units of the 911 sold for a healthy 28 percent increase, and the Boxster/Cayman line also enjoyed an impressive performance with 393 units sold, for an increase of 127 percent over last year.

The new 2013 Cayenne Turbo S is powered by the same 4.8-liter twin-turbo V8 powerplant as the Panamera Turbo S. The V8 pumps out 550 horsepower and a massive 553 lb ft of torque. The Turbo S gets 50 more horsepower and 37 more lb ft of torque than the already potent Cayenne Turbo. That will propel the luxury family hauler from 0-60 in a very quick 4.5 seconds with a top exhilarating track speed of 175 mph.

The healthy twin-turbo V8 uses the latest direct fuel injection (DFI) technology with a VarioCam and charge air cooling to generate all that power. All that torque is available between 2,250 and 4,500 rpm giving it a powerful launch on the low end. The maximum 550 horsepower is generated at 6,000 rpm. The engine has a compression ration of 10.5:1 to help generate extra power. Porsche calls the new Turbo S a “powerful athlete” and it definitely has the extra muscle to deliver exceptional performance like a finely conditioned athlete. U.S. luxury SUV buyers will likely be drawn to the powerful Turbo S when it launches this spring.

The new 2014 Caymen was unveiled at the 2012 LA Auto Show and is faster, more efficient and more powerful than the previous generation model. The new 2014 Cayman comes in two versions, the Cayman and Cayman S. The new mid-engine sports car will feature two engines that Porsche says will deliver more power and better fuel efficiency.

The new 2013 Porsche Cayenne Turbo S and 2014 Cayman and Cayman S will certainly deliver a new level of performance for U.S. buyers. Look for both new models to add to the already successful Porsche lineup and continue Porsche’s record setting sales pace.