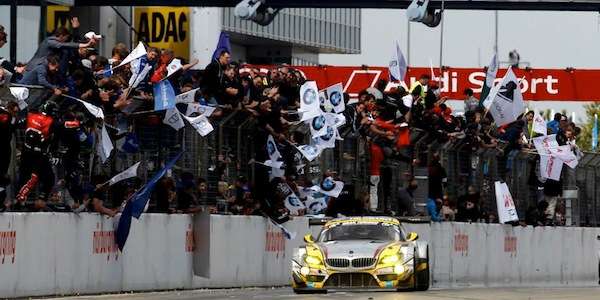 The 2015 BMW Z4 GT3 finishes a close second at the 2015 Nurburgring 24-hour race. Just how close was the finish?
Advertisement

After three hours into the 24-hour race at the Nurburgring 24-hour race, three BMW teams were running one-two-three to lead the race. Heavy rain in the Eifel Mountains of Germany put an end to the good start and shook things up on the 25.378-kilometer Nordschleife. At the end, the BMW teams finished second, fourth and sixth to complete a strong showing for BMW.

24 hours on the “Green Hell” is the most challenging race on the planet and BMW came “within a whisker” of winning it all. BMW Sports Trophy Team Marc VDS finished second in the BMW Z4 GT3 at the Nurburgring 24 hours. Maxime Martin, Lucas Luhr, Markus Palttala and Richard Westbrook shared time driving the BMW Z4 GT3 over the course of the 24 hours and produced impressive results.

The closest finish at Nurburgring since 1970

In the end, however, they just came up short of what would have been a 20th overall victory for BMW. After a grueling 156 laps, the number 25 BMW Z4 GT3 crossed the finish line at the 43rd running of the endurance classic just 40.729 seconds behind the winning Audi car. This was the closest finish in the history of the event since 1970.

BMW Motorsport Director Jens Marquardt was pleased with the race results but knew they came extremely close to winning. “Over the past 24 hours we have seen virtually everything that makes this endurance classic so enthralling. In a thrilling race, we eventually finished an excellent second and came within a whisker of winning.”

Marquardt announced that BMW Team RLL will again run two BMW Z4 GTLMs in the North American USCC. Marquardt continued, “It goes without saying that we will again see the BMW Z4 GT3 in action at many big races and in countless series.” And BMW Motorsport will return to the iconic Nurburgring 24 Hours, where they will also compete in the...read more.

The BMW Sports Trophy Team Marc VDS ran a similar race in 2013 when it also finished second with the BMW Z4 GT3. The team’s second car was extremely fast and also ran a good race just missing a podium finish coming in fourth place this year. Dirk Adorf, Augusto Farfus, Nick Catsburg and Jorg Muller were at the wheel of the number 26 BMW Z4 car. Catsburg clocked the fastest lap of the entire race on lap 120, with a time of 8:18.690 minutes.

BMW Sports Trophy Team Marc VDS, Team Principal Bas Leinders said after the race, “It is fantastic to finish with both cars in second and fourth places. An incredible amount of work goes into keeping the BMW Z4 GT3 cars in the face for the full 24 hours. We are delighted to have achieved that. My team did an awesome job. Thank you to everyone in the team. On the other hand, we obviously came to the Nordschleife to win. That was our goal. It was a great fight, but unfortunately we lost it.”