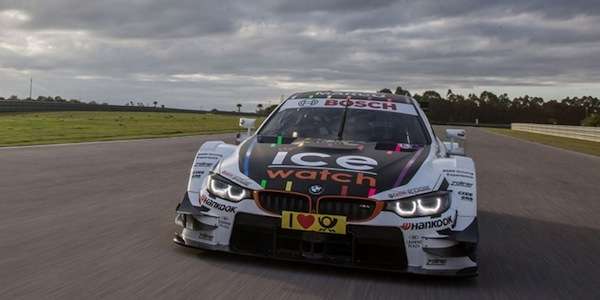 BMW Motorsport handed out trophies to the successful BMW M4/Z4 drivers and teams, but they are already looking ahead to the 2015 season.
Advertisement

The trophies were handed out on Friday to the top BMW M4 and Z4 drivers in the DTM, USCC, ELMS and Nurburgring 24-hour race venues, but BMW Motorsport is already looking ahead to the 2015 season. Of course championship BMW DTM driver Marco Wittmann was on hand to get his trophy as well as team principal Stefan Reinhold and BMW DTM driver Maxime Martin all with BMW Team RMG. The M4 team had a very successful season and will be back in 2015 to defend their title.

After the trophies were given out, BMW Motorsport Director Jens Marquardt introduced plans for the upcoming 2015 DTM, United Sports Car Championship (USCC) in North America, European Le Mans Series (ELMS), 24-hour race at the Nurburgring-Nordschleife, BMW Motorsport Junior program, and the promotion of privateer drivers and teams through the BMW Sports Trophy.

BMW M4s will make another championship run in DTM

In 2015, BMW Motorsport will again provide an extensive race program for racing enthusiasts around the globe. Seven of the eight DTM drivers from last season will also be on track in the BMW M4 DTM in 2015. Marquardt said at the ceremony, “We are already looking forward to the 2015 season, in which BMW Motorsport will once again thrill fans around the world with another extensive program. In the DTM we will once again field eight BMW M4 DTMs, with which we obviously want to follow on from the great success we have enjoyed in recent years.”

Marquardt announced that BMW Team RLL will again run two BMW Z4 GTLMs in the North American USCC. Marquardt continued, “It goes without saying that we will again see the BMW Z4 GT3 in action at many big races and in countless series.” And BMW Motorsport will return to the iconic Nurburgring 24 Hours, where they will also compete in the new BMW Z4s.

In preparation for the 2015 DTM season, BMW Motorsport was already testing the new BMW M4 cars at Jerez de la Frontera, Spain earlier in the week. Marco Wittmann said on Thursday, “It was a good test. It was nice to get back in the car after over six weeks, before we head into the Christmas break. We completed a lot of laps, in order to test a few details and gather data, which we will then analyze during the winter break.

It should be another exciting season as BMW Motorsport gets ready to race the new BMW M4 and Z4 race cars. Watch the DTM season highlight 2014 video.