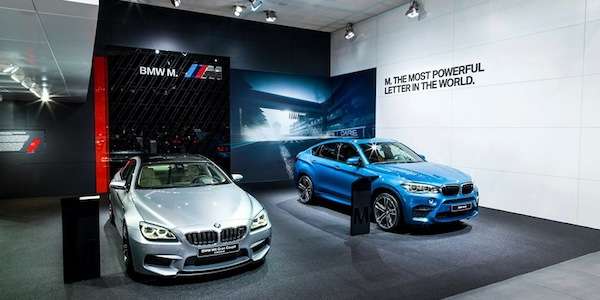 BMW tops Audi and Mercedes in the global sales race

BMW remains the global leader in luxury car sales staying ahead of rivals Audi and Mercedes-Benz. What models are helping BMW?
Advertisement

BMW reports their strongest ever first quarter with strong sales of their luxury cars globally. The BMW Group that includes BMW, MINI and Rolls Royce, sold 451,576 vehicles worldwide in the first three months. That’s a 5.4 percent increase from the previous year. Globally, strong sales of the BMW X5 and new 2 Series Active Tourer have helped BMW stay at the top of the worldwide premium sales.

BMW Group stayed ahead of rivals Audi AG and Mercedes-Benz to remain the global leader. The strongest sales came from the U.S., where sales rose 8.4 percent in the first quarter. As reported earlier here, BMW’s new M4 Coupe and 3 Series sedans had a 47 percent sales increase from a year earlier on a brand-leading 14,835 sales. The X5 was another top performer in the U.S. with sales of 4,388 which was a 7.2 percent gain.

The BMW i8 was chosen from an initial entry list of 10 new global vehicles, then a short list of three finalists that included the winning BMW i8 as well as the...read more.

BMW has plenty of momentum on its side which is helping fuel record global sales. “With the momentum provided by the range of new products we are bringing out this year, I am confident we will achieve our target of delivering more vehicles to customers this year than ever before,” said Ian Robertson, BMW board member in charge of global sales and marketing.

BMW’s M division is helping with the launch of the new 2015 M3 sedan and M4 Coupe and new X5M and X6M that received a significant increase in power. BMW stays in the lead in this three-way race.