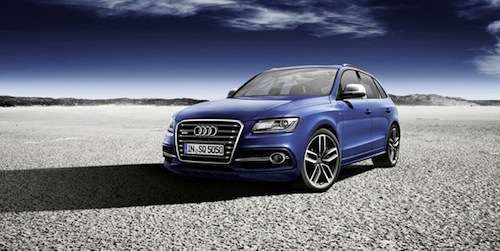 Audi is presenting the 2013 SQ5 TDI exclusive concept in Paris, which is the top model of the Q5 model series, and will be offering it as a limited production vehicle.
Advertisement

Audi is taking the all-new 2013 SQ5 TDI and presenting it as an exclusive concept at the 2012 Paris Auto Show. The Audi SQ5 is expected to be a big hit for the German automaker and when you add the performance of the TDI diesel to the mix, it gets even more interesting. The Audi SQ5 TDI makes history as the first S model from Audi to come with a diesel engine. Now Audi is taking the 313 horsepower crossover and adding “a dash of exclusivity” to the top TDI S model.

The performance SUV gets an exclusive new design just in time for the 2012 Paris Auto Show in which Audi will present the new SQ5 TDI exclusive concept. It will be a limited production vehicle from quattro GmbH, and will feature a newly designed interior and an exclusive exterior finish. Audi says the SQ5 TDI concept will have a limited production run of just 50 vehicles beginning the first quarter of 2013.

The Audi SQ5 TDI exclusive concept will feature a special exterior paint finished with an Aral Blue crystal effect. Audi says the appearance of the limited production model “conveys an amazing feeling of depth.” Other exterior features will include the S exterior mirrors finished in aluminum, Xenon plus headlights with LED daytime running lights and four exhaust tailpipes out the rear of the vehicle.

The interior of the SQ5 TDI exclusive concept gets a number of special treatments not found on the standard model. It starts with a multifunction sports steering wheel and gear shift covered in fine black Nappa leather. Both get contrasting stitching in snow white, along with the center armrest and dash. Another special highlight is the black leather sport seats with contrasting stitching with woven leather in the center section of the seats. This is a first ever feature for a production vehicle form Audi.

Audi continued the interior treatments in snow white with the Alcantara headliner, sunroof blind cover, and door applications. Wood inlays throughout the luxury interior are finished in a natural grain ash and treated to bring out the grain in the open-pored veneer. The door trims and the entry sills sport Audi exclusive SQ5 TDI exclusive concept badges.