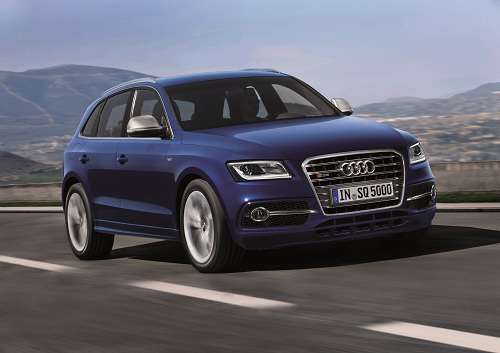 Audi has created the 2013 SQ5 which takes an already impressive sport utility vehicle and adds incredible torque to the mix. In America diesel power started off blue collar in pick-up trucks, had a short flirtation in passenger cars that went horribly wrong, became a cult movement followed by a few enlightened affluent buyers of German oil-burners, and is now becoming popular with urban professionals and those interested in fuel economy. The Audi Q5 has one mission and that is to take market share away from the luxury mid-sized sport ute segment’s leader, the Lexus RX350. Although Audi has not yet said if this version will come to the US, it almost certainly will.

Incredible Audi Diesel Torque
One way the 2013 Audi Q5 (QS5 when it is a diesel) can differentiate itself from the Lexus and from other market entrants like the new 2013 Infiniti JX, is with torque and fuel efficiency. Both the Lexus RX350 and the Infiniti JX have exactly 248 ft-lbs of torque (think it’s an accident?). That is respectable pulling power, but it isn’t the kind of power that a person with a trailer with a horse inside, or a large boat on a trailer might consider “plentiful.” Staring at a steep grade and towing anywhere near the maximum capability of these mid-sized utes can create a wee bit of apprehension. Folks driving these $50K+ vehicles are not used to having too little – of anything. Hence the Audi advantage. With 479 lb-ft of torque, nearly double the competition, the 2013 Audi SQ5 is simply the arm-wrestling champion. On the other hand, Mercedes and BMW do offer competitive torque, but Audi is looking at the real volume leaders to set its goals.

Audi SQ5 Diesel Performance
The 2013 Audi SQ5 diesel is surprisingly fleet of foot. With a 0-60 mph time of about 5 seconds flat, according to a press release, the vehicle is making good use not only of the torque, but also the 313 horsepower. An eight speed transmission will help. Diesels shift at low RPM and have torque curves that are pretty flat. That means that with an abundance of gears, the engine will behave almost like it is coupled to a constantly variable transmission, which is exactly what the JX has. Let’s just say it. Almost no auto enthusiast has ever opted for a CVT. Contrary to this, Audi has the best of both worlds in this pairing, the preferred transmission style, with all the benefits.

Fantastic Fuel Economy
Other than the benefits of torque, the only real advantage of diesel in a luxury sport utility vehicle is fuel economy. Audi claims an average fuel economy on the European test loop in the low 30 mpg range. That could well rival the Lexus RX hybrid numbers and will almost certainly beat the pants off any gasoline engine variant in the segment. Range comes from increased miles on a gallon, and that is never a bad thing in a utility vehicle that may be stuffed with gear for a trip to vacationland.

By introducing the 2013 Audi SQ5 to pair with the Q5, Audi has given shoppers a reason to look at vehicles other than the RX hybrid for fuel economy, and away from the American vehicles for towing.

Tesla-Funded Research Reveals One of The Biggest Mysteries of EV Battery
Tesla Tesla Buyer Nets a Whopping $12,000 Discount After Asking for Reduction
END_OF_DOCUMENT_TOKEN_TO_BE_REPLACED