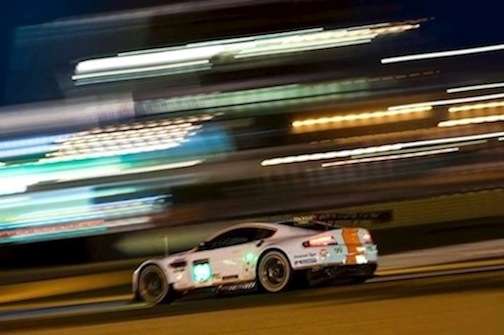 Allan Simonsen has died in a crash at the 24 hours of Le Mans driving for the Aston Martin team. The Danish driver had put the #95 Aston Martin car at the top of the time sheets.
Advertisement

Race driving is a risky business and it doesn’t get any more serious for the Aston Martin team today. It has been reported from France that Danish driver Allan Simonsen has died after crashing at the Le Mans 24 Hours race today, organizers said in a statement. Simonsen was driving the Aston Martin #95 car when it spun off into the barriers on lap three at Tertre Rouge after 10 minutes.

Race organizers said, "In a serious condition, Allan Simonsen was transferred immediately to the Circuit Medical Centre where he died soon after due to his injuries," read a statement on the race's website.

The Danish driver was immediately taken care of at the scene of the accident by the doctors of the medical service of the Automobile Club de l'Ouest. In serious condition, Simonsen was transferred immediately to the circuit Medical Centre where he died shortly after his arrival as a result of his injuries.

The family of Allan Simonsen was immediately notified by David Richards, Team Principal Aston Martin Racing. Allan Simonsen, was an experienced driver, at age 34 he was entering its seventh 24 Hours Le Mans. He shared the wheel of his car with his fellow Christoffer Nygaard and Kristian Poulsen.

Allan Simonsen from Denmark had secured the pole position in the GTE Am class with the #95 Aston Martin car to continue the team’s 100 per cent pole success rate in the 2013 FIA World Endurance Championship (WEC) season. In the GTE Am class, Simonsen put the #95 car at the top of the timesheets at the start of qualifying one, a position that the car held right until the end of session three when Simonsen bettered his time to a 3:57.776.

The Aston Martin team couldn’t have been in a better position. Yesterday, Simonsen was quoted: “It was tricky at the start with the changing conditions and it was a typical Le Mans last lap dash. To start the 24 Hours of Le Mans on pole is fantastic. We’re all looking forward to the race."

Yesterday, before today’s tragic events, Aston Martin Racing Team Principal John Gaw commented, “We all know, however, that in a 24-hour race, starting positions aren’t too important. We need to ensure we continue the reliability that we demonstrated at Silverstone and Spa to get all our cars to the end of the race safely and without issues.”

It is a very sad day for the Aston Martin team and for the family of Allan Simonsen.

It is with great shock and sadness that the Aston Martin Racing Team confirms that an accident occurred shortly after the start of the 24 Hours of Le Mans at around 15:09 hrs CET today (22 June) when the No 95 Vantage GTE driven by Allan Simonsen left the track at Tertre Rouge.

Tragically, and despite the best efforts of the emergency services in attendance, Allan’s injuries proved fatal. Aston Martin Racing Managing Director, John Gaw, said: “On behalf of all of us at Aston Martin Racing, I would like to extend our deepest sympathies and condolences to the individuals, and families whose friends or loved ones were involved in today's terrible tragedy.”

Aston Martin Racing will not make any further comment until the precise circumstances of the accident have been determined. Next of kin have been informed.

Following the ACO’s media statement concerning the tragic death of Aston Martin Racing driver Allan Simonsen, and at the specific request of his family, the team will continue to participate in the 24 Hours of Le Mans in tribute to Allan.

Watch the two crash videos below.

Elon Makes a Cybertruck Statement With an Action, But Quiet in Words
Tesla's Record Month in China: Doubled Registrations in March 2021
END_OF_DOCUMENT_TOKEN_TO_BE_REPLACED