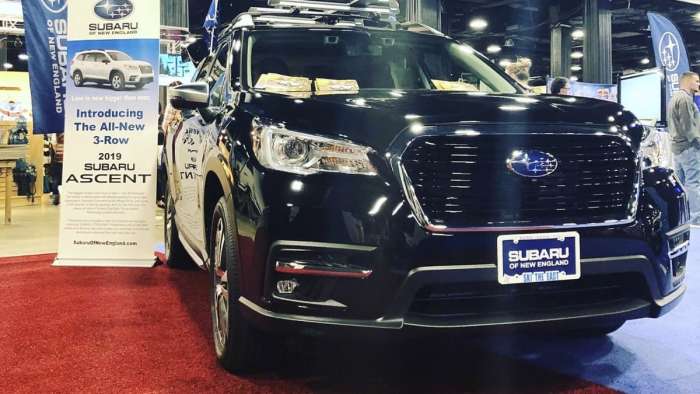 Ascent family hauler has launched Subaru off the pad and into orbit. See how the brand made a meteoric rise to #1 in Consumer Reports Best Car Brands.
Advertisement

Subaru made a mistake with the Tribeca 3-row vehicle, but they have corrected the problem with a new family hauler called the Ascent. It’s Subaru's 3-Row family vehicle that has launched the brand into orbit. According to Consumer Reports “Which Car Brands Make the Best Vehicles,” Subaru tops their overall brand rankings chart this year for the first time. The Japanese automaker jumped up six spots knocking off last year's # 1, Genesis luxury brand “off its perch.”

CR says it was the all-new Ascent family hauler, new-generation Crosstrek, along with the newly-remodeled 2019 Forester sitting on top of their respective categories that pushed Subaru up six spots to the overall number one car brand in America. CR says Chrysler and Tesla sank the most, each falling 11 spots.

Subaru of America has seen impressive success with U.S. consumers who have responded well to their all-wheel-drive lineup. The Cherry Hill N.J. automaker has achieved 10 years of consecutive year-over-year growth because of the success of the new Ascent, Crosstrek and Forester models. It’s been Crosstrek that has been leading the pack in growth. The small SUV was up +31.1 percent in 2018 and started 2019 off strong.

It wasn’t all good news for Subaru Corporation. The sport-tuned Subaru WRX and performance-tuned WRX STI had much-below-average predicted reliability. Subaru Corp has been hit with a slew of engine lawsuits recently for the STI 2.5-liter turbo engine. But it wasn’t too much to keep the new 2019 Subaru Ascent, Forester and Crosstrek all-wheel-drive SUVs from pushing the brand to the #1 Best Brand ranking in 2019.