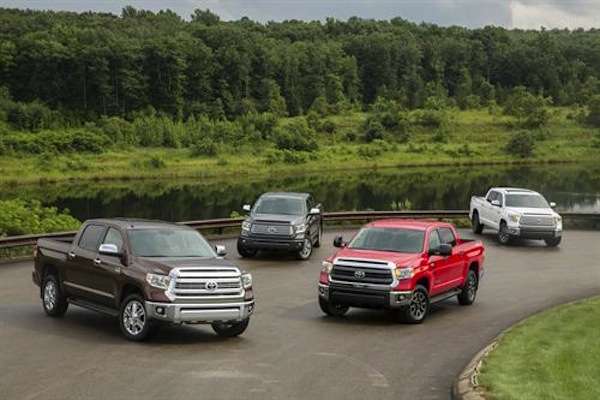 The all-new completely redesigned 2014 Toyota Tundra is 100 percent American designed and built here in the U.S. Can it compete with Ford, Dodge and Chevrolet?
Advertisement

When Toyota set out to redesign the all-new 2014 Tundra they did it specifically for the U.S. market and for American truck owners. Toyota knew the full-size truck segment is the most competitive in the automotive industry and they needed to come up with something special. Toyota looked at Ford, Dodge and GM and looked at every nut and bolt and how they put their trucks together. They even enlisted the services of a hay farmer, Mike Sweers, from Northern Michigan with an engineering degree to head up the engineering team. Their goal was to make the “best truck in the industry.” Did they succeed?

The 2014 Toyota Tundra development started back in 2010 and is the result of design and engineering from an all-American team. It was engineered by Toyota Technical Center in Ann Arbor, Mich., and the new design came from Calty Design Research centers in Newport Beach, Calif., and Ann Arbor. The Tundra’s engines are built at Toyota Motor Manufacturing Alabama, Inc. in Huntsville, Ala., and transmissions are built at a production facility in North Carolina. Tundra is assembled at Toyota Motor Manufacturing, in San Antonio, Texas making it a truly American truck.

The 2014 Tundra is all-new inside and out. It gets a bold new front end and chiseled body thanks to feedback from customers saying they wanted a look that announces that they drive a truck “to be reckoned with.” Everything is new on the Tundra from front to back including a new bed and tail gate. The 2014 model also gets a completely new interior. Tundra comes in three grades with each having a unique identity. Tundra comes in three cab styles: two-door Regular Cab, four-door Double Cab, and the “super-sized” four-door CrewMax.

Toyota says the new interior variations are “thematic and cater to a specific customer with a specific budget.” Improvements include easier driver access to controls like the audio and HVAC controls where reach was reduced by 2.6 inches. CrewMax gets a new front and rear seat design and improved front seat ventilation. Front seats gets additional travel and CrewMax rear seats can now be folded up for additional cargo carrying capability. And load height has been lowered by more than 11 inches.

Each grade has a unique identity

Tundra gets several enhancements to the suspension which include re-tuned shock-absorber valving to improve ride quality over harsh surfaces. Steering feel has been improved and aerodynamic stabilizer fins have been added to the outside of the rear tail lamp lens, and the outside mirror bases to reduce air turbulence. Sound-deadening NVH treatments and insulation have been added throughout to reduce sound to the cabin of the 2014 full-size Tundra.

Tundra will also feature a number of key standard features for 2014, including a segment-exclusive standard back-up camera (viewed from the audio display screen), and standard Bluetooth and audio streaming on all grades.

Nothing new in powertrains

The all-new redesigned 2014 Toyota Tundra was designed and built in America to compete with the F-150, RAM and Silverado full-size trucks. It looks like Toyota has taken a big step in giving U.S. truck buyers what they want. This new 2014 Tundra sees the first major change since 2007 and it will give the competition a reason to look in the rear view mirror.