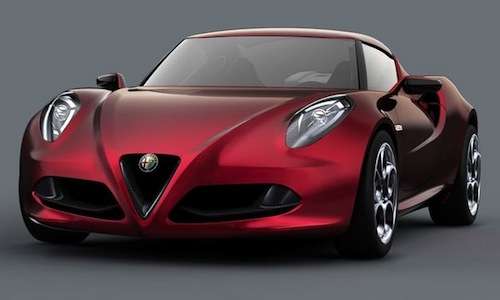 According to a report posted on the U.S. Federal News Service, Fiat’s Alfa Romeo division registered the brand of its 4C sports car.
Advertisement

After a twenty year hiatus in the U.S., Alfa fans can begin to celebrate, because according to Automotive News, Fiat’s Alfa Romeo division took a major step in bringing the brand back to the U.S. According to a release posted on the U.S. Federal News Service, the Alfa Romeo 4C trademark was issued by the U.S. Patent and Trademark Office on April 10, 2012. The trademark covered not only the 4C sports car, but also accessories such as clothing and toys according to the report.

This means we will see the return of the Alfa brand to the U.S. market after a long absence. Fiat CEO Marchionne confirmed on April 4, that the rear-wheel-drive coupe will go on sale in North America by the end of 2013. As reported here last week on Torque News, Fiat announced Maserati will begin building the Alfa Romeo 4C at their Modena, Italy plant where it builds its flagship GranTurismo coupe and convertible models with production expected to begin in May of next year.

It's reported that Fiat plans to build 2,500 of the small 4C’s per year which could put a high demand on the car similar to the Subaru BRZ. Although the BRZ has a starting price of $25,495, the Alfa Romeo 4C will be priced at about 50,000 euros ($66,000) in Europe and there has been no official U.S. pricing announced yet. But the small sports car should have strong sales in the U.S. and that could push prices higher.

Fiat CEO Sergio Marchionne plans to remake Alfa into a luxury brand to compete with industry leader BMW. "The return of Alfa in the U.S. is critical for the group as a global player needs to have an upscale brand in a major market as North America," Jeff Schuster, LMC's senior vice president of forecasting in Troy, Michigan, said. "This is a real sign Alfa will come back to U.S."

The Alfa Romeo 4C will be a rear-wheel drive mid-engine design and if the production model gets the same engine as the concept car, it will be powered by a 1.7-liter, direct-injected turbo four-cylinder used in various cars across the Fiat line. The turbocharged engine could develop around 250 horsepower when it reaches production. The 4C will weight around 1870 lbs. and it should produce sub-five-second 0-to-60-mph times making it a true sports car.

The combination of light weight and the power-to-weight ratio suggests the performance of the 4C will be on par with that of a Porsche Cayman. Private sources say the production version of the two-seat 4C may be displayed at the 2013 Geneva car show. Alfa Romeo fans can begin to party.