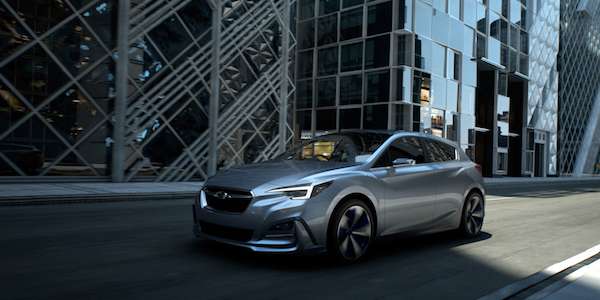 The Impreza 5-Door Concept makes its North American debut. Why is the 2017 Impreza the most important new vehicle launch for compact car shoppers?
Advertisement

Even though Impreza is Subaru’s entry model in their lineup, the 2017 Impreza will be the brands most revolutionary new vehicle launch since the Crosstrek was introduced. It starts with the Impreza 5-Door Concept that was first introduced in Japan and now makes its North American debut in Canada this week. Impreza 5-Door Concept was unveiled at the 2016 Montreal International Auto Show that runs from January 15-24. Why should car shoppers be excited about the new 2017 Impreza?

The Impreza 5-Door Concept is a design concept previewing the next-generation Impreza. The new 2017 Impreza will be built off a new platform and it will be the first of Subaru's next-generation strategic vehicles. It’s setting the stage for new things coming from Subaru. It will be a good thing for all car shoppers looking for safety combined with all-wheel-drive performance.

Why is Impreza an important vehicle for Subaru?

Fuji Heavy Industries (FHI), manufacturer of Subaru cars, introduced what they called Vision Prominence 2020 in May 2014 that will bring sweeping changes to the Subaru lineup. Subaru will introduce a new Global Platform and the first vehicle to get it will be the new Impreza. This new design language and platform seen in the Impreza 5-Door Concept will filter down to every vehicle in Subaru’s lineup.

Subaru’s Impreza has been built at FHI’s Gunma plant in Japan up until now, but the new 2017 Impreza will roll off the assembly line in the U.S. starting late next year. This is an important move for Subaru as plant expansion in Indiana will allow them to ramp up production in North America. Without this increased capacity, Subaru’s continued sales increases would slow down considerably. Subaru’s problem is they can’t built their all-wheel-drive vehicles fast enough.

Impreza gets it all started

The new 2017 Subaru Impreza isn’t here yet, but Subaru is counting on it to be the most important new model launch since they introduced the VX Crosstrek crossover. The new Impreza will feature the brand’s “Dynamic x Solid” design featuring more interior space and increased safety that will be the hallmark of Subaru's future models as a whole.

One of Subaru’s core values is safety and they aim to be the worldwide safety leader. The new platform seen in the Impreza 5-Door Concept, and coming on the new-generation Impreza, will build on Subaru’s incredible safety record. Every model in their lineup has earned TOP SAFETY PICK (TSP) awards from the Insurance Institute for Highway Safety and helped the Subaru Forester and Legacy become the longest-running TSP winners in their class.

Subaru created a niche market with their all-wheel-drive platform and it's a big reason for their success. The new-generation Impreza will feature a new design language combined with Subaru's Symmetrical AWD system that sets it apart from Toyota, Honda, Ford and Hyundai. This a major reason why Subaru is setting records year after year. Consumers like their recreation-purposed all-weather capabilities.

Subaru will build on these core values with the 2017 Subaru Impreza’s new global platform. You can see Subaru’s future now in the Impreza 5-Door Concept at the Palais des congres de Montreal January 15-24. The Impreza Sedan Concept can be seen at NAIAS in Detroit January 11-24.