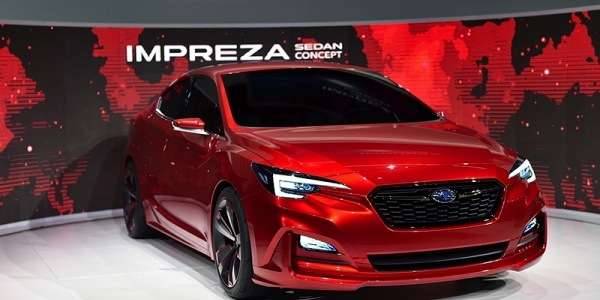 The new-generation of vehicles for Subaru is previewed with the Impreza SedanConcept at the LA Auto Show. How does this concept reveal Subaru’s future?
Advertisement

The 2017 Subaru Impreza will get the first new-generation platform that is coming on all new Subarus in the future. Subaru unveiled the Impreza Concept sedan yesterday and it reveals what Subaru calls their Dynamic and Solid design theme for the entire brand in the future and was unveiled with the Impreza Concept at the LA Auto Show yesterday. While the new 2017 Impreza won’t likely look exactly like the show car, how does this concept reveal Subaru’s future?

The new 2017 Impreza will feature enhanced safety features and the new-generation Eyesight driver-assist system which is a core value for Subaru. Safety will improve with Subaru’s new platform and will help Subaru achieve the goal of being the safety leader in the future. Check out the Impreza Sedan Concept video.

Starting with next year’s models, Subaru will introduce a new modularized platform called the Subaru Global Platform that will support every model starting with the Impreza compact and make its way to the SUV-alternative Outback. It will make its debut in the next-generation 2017 Impreza that will be built in the U.S. and will launch in late 2016.

Yasuyuki Yoshinaga, President and CEO (FHI) sad yesterday at the LA press conference that Subaru Indiana Automotive where the new 2017 Impreza will be built is stepping up their Indiana plant expansion by 6 months and will be able to build more Outback wagons beginning next summer. This will help alleviate the backlog of orders and customer waiting period for the new SUV-alternative wagon.

While Yasuyuki Yoshinaga didn’t reveal the drivetrain in the 2017 Subaru Impreza sedan, Subaru has said they will overhaul the brands powertrain technology, adding cylinder deactivation and lean combustion cycles by 2020, to meet more stringent emissions standards. Subaru has said they want engines “with thermal efficiency rates above 40 percent, which would top that of the engine in the Toyota Prius hybrid.” Stay tuned.