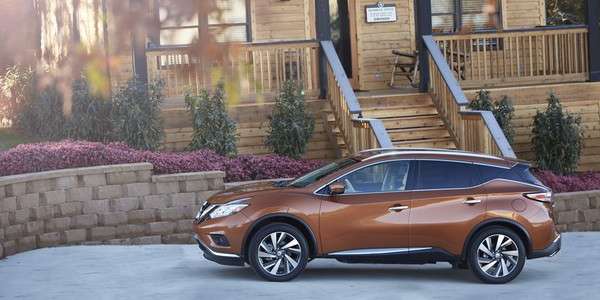 The 2016 Nissan Murano is named "10 Best Family Cars" by Parents magazine and Edmunds. What 4 things stand out?
Advertisement

Parents magazine and Edmunds think the 2016 Nissan Murano is one of the best family cars out there. The Murano gets the award for the second straight year so the mid-size crossover is a hit with these two organizations. Parents magazine likes the kid-friendly features that sets it apart for families. Scroll down to page 2 to see why.

The 2016 Murano gets Murano’s new styling outside and more luxury inside and is a top-seller for the Nissan brand. It’s offered in four trim levels: S, SV, SL and Platinum. Families can get the crossover in either front-wheel or all-wheel drive. Murano is powered by a 260hp 3.5-liter DOHC V6 mated to an advanced Xtronic automatic transmission. It gets an EPA fuel mileage rating of 21/28 city/highway. Murano has a starting MSRP of $29,660 for the base model.

Not the first award for Murano

Nissan Murano has received a number of awards the last two years. Nissan says the 2015-2016 Murano has won more awards over the last two years than any other SUV in its class. The crossover was also recently named as one of the "Best Cars for the Money" by U.S. News & World Report. This was the second straight year Murano won this award. It was just named the "Activity Vehicle of Texas.” "We're going to need a bigger trophy case," said Dan Mohnke, vice president, Nissan Chief Marketing Manager & Marketing Operations.

PAGE 2: 4 things stand out about Murano

Murano gets Nissan’s new safety features to protect families. Nissan calls it their Safety Shield. One safety feature called Predictive Forward Collision Warning, uses radar to constantly monitor not just one vehicle ahead in your lane, but two. It can bring the vehicle to a stop even if the driver doesn’t see the danger ahead. There’s 4 things inside for families that Parents magazine singled out.

Parents Editor-in-Chief Dana Points especially likes the Murano crossover for its kids-friendly features. She says, “The redesigned Murano has terrific passenger and cargo space, including comfy contoured rear seats that kids, and even adults will appreciate. Plus its utter lack of cabin noise ensures that kids can nap undisturbed on long drives."

The Parents and Edmunds.com editors base their selections on a range of factors, including safety, comfort and capacity, fuel efficiency, price and value, reliability and "kid-friendly" features. The 2016 Nissan Murano is singled out for its passenger and cargo space, comfy rear seats and quiet cabin.

Elon Musk Says Tesla To Offer Car Insurance in Texas Next Month, But These Challenges Exist
Tesla Co-Found Plans To Build a Battery Factory and Shift The Industry
END_OF_DOCUMENT_TOKEN_TO_BE_REPLACED